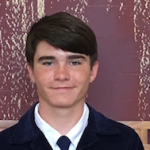 “He chose a research project and conducted research during the year and presented it in a paper and in a display at the competition,” Paris said.

Paris said Newman was very excited while he was doing the project.

“His actual project this year was he has a small flock of sheep and what he actually did this year was he weighed the baby lambs from the time they were born until they were weaned at eight, nine weeks,” Paris said. “He compared the weekly weight gains between the… males and the females.”

Paris said Newman had 38 lambs this year, and he weighed each of them and researched previous literature regarding the weight gains and compiled all of his data and presented it.

“He likes science, and he really likes animals, and he shows livestock throughout the year,” Paris said. “He shows sheep, lambs, he has some beef steers that he shows and some … goats also. He also placed in the top 10 in the state livestock competition; he was ninth place.”

Newman said this was the first year he got the chance to qualify for the national convention.

“I think it’s good enough to actually go to the nationals and maybe place really good in it,” Newman said.

He said he’s been in the FFA for three years and that this was something he’s always been interested in.

“I’m looking forward to seeing all the different people from across the nation and seeing what everybody else’s ideas are and get to know them,” Newman said.

While many high school students enjoy the break from the school year, 10 students from Buckingham County High School and... read more