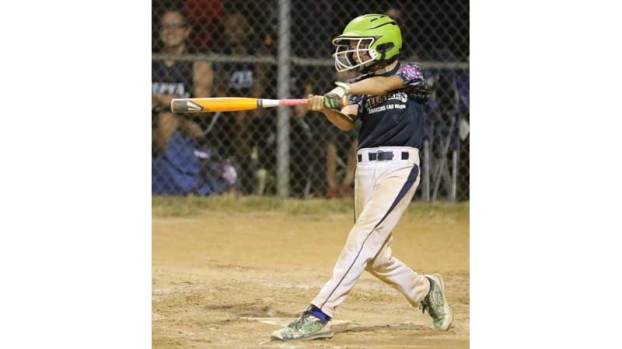 The Prince Edward-Farmville Youth Association (PEFYA) Minors All-Star team has taken its reputation as masters of the comeback win to the state tournament, advancing to Monday’s night’s battle of unbeaten teams in Appomattox by engineering a 20-19 come-from-behind victory over the Halifax All-Stars.

PEFYA Minors Manager Jerry Morgan said that in talking to his players, “we as the coaches try to remind them that you’re never down until the game is over, and that’s what we’ve reminded them every game — even through the districts — that you can come back from anything. Just don’t give up.”

His team took a 2-0 lead Sunday after the first inning then fell behind 10-2 going into the third.

Prince Edward-Farmville made the score 10-6 after the third, then put together an 11-run rally in the fourth to suddenly jump out to a 17-10 lead.

Helping settled the PEFYA Minors down on defense was Austin Morgan’s steady presence and play on the mound. He threw the maximum allowed amount of pitches at the Minors age level — 75.

“He doesn’t let himself get bent out of shape if something happens, and I think that had a lot to do with keeping everybody calm,” Manager Morgan said.

Halifax did not go away quietly, scoring one run in the fourth, five in the fifth and three in the sixth, but Prince Edward-Farmville produced the two runs it needed in the top of the sixth and its defense did just enough to secure the victory.

To open its play in the tourney Friday, PEFYA defeated the Buckingham County Youth League All-Stars 8-6.

“The defense is what kept us in that game,” Morgan said.

In the top of the fifth, when he was playing first, he caught a line drive and tagged the base for a double play.

“And then Josh Simon made a double play at shortstop in the sixth inning to end the game,” Morgan said.

Simon, who has been a clutch closer on the mound, was set to start for PEFYA on Monday against the Montgomery All-Star team.

The girls of the Prince Edward-Farmville Youth Association (PEFYA) Ponytails All-Star team have earned the right to enter the highest... read more