Maggie Marie Taylor, 73, of Buckingham, died July 13, 2017 at her home.  She was born November 19, 1943 in Buckingham County, the youngest of 12 children of the late Alfred Lee and Maggie Goin Shumaker. 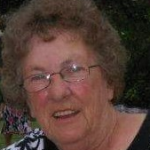 Maggie had a fondness for Conway Twitter, Dollywood, dancing and traveling with her husband.  She loved her boys but her grandchildren were her pride and joy. She enjoyed watching children play baseball and softball, whether it be her children, grandchildren or every other child on the field.

In addition to her parents she was preceded in death by her siblings, Willie and James Goin and Alfred, Hubbard, Willie, Sydney, Down, Douglas and Ada Shumaker.

Funeral services were held July 14, 2017 at the Dunkum Funeral Home with interment in the Trinity Methodist Church Cemetery.

Memorial contributions may be made to the Buckingham County Rescue Squad and Dillwyn Volunteer Fire Department.