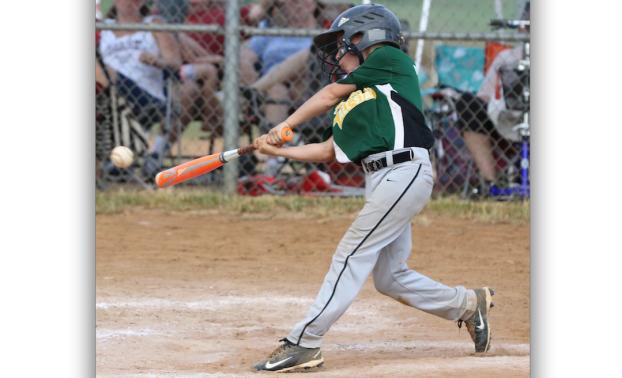 The Buckingham County Youth League (BCYL) Minor League All-Stars were not able to carry their winning ways from the district to the state tournament, but they still finished the summer with a winning record.

The squad lost 8-6 to the Prince Edward-Farmville Youth Association (PEFYA) All-Stars on Friday and fell 7-4 to the Salem All-Stars on Saturday to be eliminated from the State Dixie Youth Baseball AAA Minor League All-Star Tournament in Appomattox.

“We didn’t play to what our potential was,” BCYL Minors Manager Troy Wooten said. “I don’t know if the heat had something to do with it. We were a little too aggressive behind the plate, swinging at stuff we probably shouldn’t have, and it hurt us in the long run as far as scoring runs.”

He also noted that his team’s pitching walked significantly more batters than usual.

In the contest against Salem, Buckingham produced 10 hits.

Avery Schaeffer put in a strong performance on the mound early in the game, and he was also a standout at the plate, going 3-for-3 with three singles.

Micah Wilson was another key offensive contributor, going 2-for-3 with a triple and a double, and he drove in two runs.

Kayne Wooten drove in a run as well.

The BCYL Minors recorded eight hits in their loss to PEFYA. Schaeffer drew two walks and had a hit.

Buckingham finished its all-star run with a record of 3-2. It swept the District 4 tournament, outscoring its opponents 41-12.

Manager Wooten said all 12 players on the roster will move up to Majors next year.

“They’re a great group to work with,” he said. “They’re definitely hardworking, and they were willing to try different type(s) of plays, do (it in) practice and do it in the actual game.”

A series of successes makes us proud

This summer as of this writing, not one, not two, but three Dixie youth teams from the Heart of Virginia... read more