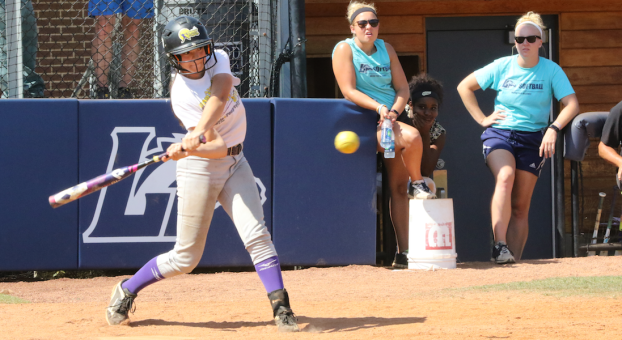 The Longwood University softball program held its summer camp last week from Monday-Wednesday, attracting 130 participants ranging in age from 9 to 17.

“That’s probably close to the best that we’ve had,” Lancers Head Coach Kathy Riley said. “One other year about 10 years ago we had a lot of kids. Last year, we had about 87 or 88, so having 130 was definitely a plus for us, and probably really due to the fact that we were on television and more kids were interested because they saw us in the regionals.”

After winning the Big South Championship on Lancer Field, where campers got to play last week, the Lancers advanced to the NCAA Knoxville Regional and fought their way to the regional championship round for the second consecutive year.

Longwood’s players learned a lot through the challenges they faced after a difficult first half of the 2017 season, and Riley, her staff and more than a dozen of her players tried to help campers achieve similar growth last week.

“Our philosophy has always been that we really want to be able to challenge them so that they can learn to make adjustments and find out a little bit more about themselves and how they need to react in situations,” Riley said. “We always want to do that through softball. I felt like we did definitely teach fundamental skills of the game as well.”

The coach noted that this camp specifically is intended for instruction and personal development.

The overnight nature of the camp is one aspect of it that helps campers development personally as they stay in the dorms with the Lancer players.

Riley said 120 campers stayed overnight, and it helps some of the girls learn a little bit of independence, and in some instances, it may even be the first night they’ve spent away from their parents.

“We probably had less this year than we’ve had in a long time with kids really being nervous,” she said, “and that really probably goes back to how well the Longwood girls and the rest of the counselors that were there, how much interest they took in those kids as individuals.”