Edward Coffman Walton Jr., 95, of Cartersville, passed away on July 13, 2017. Born at “Penrith” in Cartersville on Nov. 7, 1921. He was preceded in death by his wife, Betty Renn Walton; parents, Edward and Martha (Mattie) Bigger Walton and brother, Herman Leland Walton. 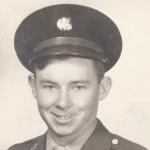 Edward was a veteran of WWII, having served with the Fifth Army Air Force, 336 Combat Cargo, from the invasion of New Guinea to the occupation of Japan. He was a lifelong member and dedicated leader of Thomas Chapel United Methodist Church, where he served as trustee and board chairman for many years. A charter member of the Cartersville Ruritan Club where he served as secretary for 32 years. He was also a charter member of Cumberland County Farm Bureau Federation. He was chosen “Young Farmer of the Year” by the Cumberland Young Farmers Association in 1960. He always had a deep love for his Farmall tractors and hunting dogs.

Services were held Monday in Thomas Chapel United Methodist Church, Cumberland, with interment in church cemetery. Online condolences may be made at bennettbardenfh.com