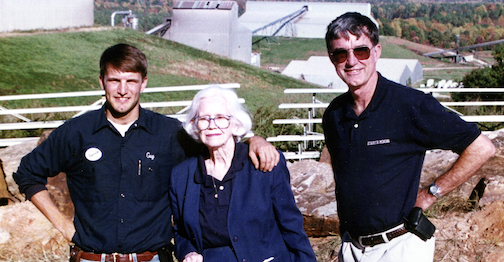 Gene B. Dixon Jr., right, stands with Terrell H. Dunnavant, who worked for Kyanite Mining Corp. for 64 years, alongside his son, Guy B. Dixon. Gene, who served as chairman of The Disthene Group Inc. — the parent company of Kyanite — died Monday after a courageous battle with prostate cancer.

Gene Bishop Dixon Jr. — who served as president of Kyanite Mining Corp. and chairman of The Disthene Group Inc., the parent company of Kyanite — is being remembered as a man of strong moral character and vision, coupled with a sharp prowess for honesty, business and treating people fairly.

After a battle with prostate cancer, Dixon, 74, died at Chellowe — his home — on Monday.

Family served as a beacon of happiness for Gene B. Dixon Jr., who died Monday in Buckingham. He enjoyed seeing his children do well and enjoyed “just normal dad stuff,” his son, Guy, said.

He was the third generation of the Dixon family to own and operate Kyanite Mining — Buckingham’s largest private employer, following in the footsteps of his father, Gene Bishop Dixon Sr., and grandfather, Guy Alexander Dixon, who were part of an early group of about 10 people who purchased then-Kyanite Products Corp. out of bankruptcy in the early 1940s.

After Gene’s father died in 1974, he became president of Kyanite Mining Corp. In 2005, Gene Jr. would become chairman of The Disthene Group while his son, Guy, would become Kyanite’s president.

Dixon — known affectionately as “Mr. Gene” to many who knew and worked for him — was born in Cullen in Charlotte County on Feb. 26, 1943, according to his obituary. He graduated from Randolph-Henry High School in 1961 and attended Hampden-Sydney College (H-SC) before joining the U.S. Marine Corps in 1966.

According to his obituary, Dixon “made a distinguished career for himself at Kyanite Mining Corp., where he did every job from collecting the change out of the Coke machines to lighting the dynamite fuses by hand to serving as president.”

According to his obituary, he ended his career as chairman of The Disthene Group Inc., the parent company of Kyanite, The Cavalier Hotel in Virginia Beach and Blue Rock Resources.  “Under his almost half century of leadership, the company grew several fold, developed markets for its product all over the world and prospered while winning several state and national environmental awards. Most tellingly, however, he was respected and beloved by the people he worked with over the decades.”

Guy, who currently serves as president of Kyanite, said his father, like him, worked at the mine when he was a teenager. When Gene exited the Marine Corps in 1968, he became involved in the operation in a professional capacity.

“… We don’t pay much attention to titles,” Guy said of his father’s lasting involvement in the firm through last fall. “He did what he had always done, and I did what I had always done. We tried not to step on each other’s toes too much,” Guy said.

“He loves the history of Virginia,” Guy said of his late father. “He loves the history of rural Virginia. He loves the old-fashioned work ethic, I guess he would say, of country people. He loves how they’re tied to the land and outdoors and their churches. I don’t think he could have ever survived living in Richmond, much less D.C. or New York or something like that. He just needed to be out in the country with people like he grew up with.”

Guy said his father missed his mother, Barbara, who died in 2014. The two were married almost 50 years.

“He was a real outdoorsman,” Guy said of his father, noting his affection for quail hunting, fly fishing, camping and canoeing.

Building his business, along with his family, brought him happiness, according to Guy.

“Clearly, the company was a big part of his life and almost became more so once mom passed away. … Seeing the company do well and grow and employees do well, being with customers and having them appreciate what you do for them — all that was a really big part of his happiness,” Guy said.

Following the theme of Gene being personally involved and invested in the business, Guy said his father was “really hurt” by what Guy termed “a gross miscarriage of justice that happened with this family lawsuit, that kind of … did some real harm to the company and our family a few years ago. That really was hard on him,” Guy said, alluding to Colgate, et al. v. The Disthene Group, Incorporated, a civil lawsuit filed against Disthene by Curtis Dixon Colgate, Sharon Marie Newcomb and Marion J. Colgate Sr., seeking the dissolution of the company and the distribution of its assets on a pro-rata basis to all the shareholders. Curtis and Sharon were the children of the late Jeanne Dixon Colgate, Gene’s late sister. Marion was the widower of Jeanne.

“That hurt him a lot. It hurt me a lot,” Guy said of the verdict. “We got through that, and we are stronger for it.”

Guy pointed to family as a beacon of happiness for his father, who enjoyed seeing his children do well and enjoyed “just normal dad stuff,” Guy said.

“I don’t know where it came from … other than, obviously, my father acknowledging that the success of the company isn’t due solely to his own efforts — much less his son’s efforts,” Guy said when asked what drove Kyanite to give back to the community in the way it does. “There is — depending on what you are looking at — 130, 140, 150 people out there busting their butt every day to make the company run and prosper.”

In addition, he said that “when we try to do something, we feel, in general, like we have the support of the community.”

Guy called it natural for a firm to give back to the community — notably where its leaders are born and raised. “Why wouldn’t you do that?”

Guy remembers his father teaching him and his siblings — Arch and Vail — moral character.

“When I was real young, he instilled … giving it 100 percent, and maybe more than that. Never quitting was a big, big thing.”

Guy said his father taught him the people who prevailed in the end “were the people who just kind of don’t give up and who get up every morning and put on their boots and try again no matter what … failures the previous day had brought. The persistence of never giving up kind of pays off.”

Guy pointed to a fond memory of his father, recalling how, when he was very young, Gene taught him how to ski.

“This is just crazy for me to think about, like, I would never do this,” Guy said. “We would get up at like 3 a.m. and drive to Snowshoe (in West Virginia) and ski all day and drive back the same day, and he’d go to work the next morning or whatever.”

Guy was 8 or 9 years old this particular morning.

“…It was really, really cold, and he had an old diesel truck. And we drove all the way up to Lewisburg, (West Virginia), and we got to the base of Snowshoe Mountain … We stopped to, like, get a cup of coffee or hot chocolate or something.”

Unbeknownst to the father and his young son, the diesel in the truck had frozen while they were in the visitor’s center.

“It was over,” Guy said. “I thought the day of skiing with my Dad was done, but — and this is consistent with the ‘never give up’ mindset I just mentioned — dad gathered up the skis and we hitch-hiked up the mountain. It was bitterly cold, something like -10 degrees Fahrenheit, but Dad wasn’t going to take ‘no’ for an answer. That was a really fond and typical memory of my father for me.”

“Legacies are something that develop of their own accord,” Guy said of his father. “I would think that he was seen by almost everybody that he worked with as a fair, straight-shooting, honest … kind of guy. And I think everybody saw that in him and respected that.”

Guy said Gene served as a father figure to many of his employees.

“I’ll leave talk of his legacy to other people. I think he’ll be remembered for a very long time in a positive way.”

“I knew Gene more as friend than in a professional capacity. As a friend, one could have no better,” said E.M. Wright Jr., who Guy cited as a friend of Gene’s.

“I do know that he enjoyed his work as a miner. I know he found pleasure in taking his early vision of what could be and developing that vision into what is now known as ‘East Ridge’ operation. He saw the potential and made it happen. The mining operation grew substantially during his tenure. Beyond the local running of the mining operation, he was involved professionally with mining and ceramics organizations. He was well-respected by his peers,” said Wright, who serves as the commonwealth’s attorney for the county.

“From banking to investment to hotel business, he did well. Beyond that, Gene was a strong supporter of people and community. Some of the things he did are recognized. Others he did without any need or expectation of recognition or acknowledgement. He did them because he was a good and generous person.”

Dixon served as a member of the National Mining Congress, the American Ceramic Society, the Refractories Institute, the Virginia Port Authority “and embarked on a 44-year relationship with The Bank of Charlotte County, serving as director and chairman of the board,” according to his obituary.

For more than 22 years, Dixon served as a trustee at H-SC and was on the Southside Community Hospital Board of Managers for 33 years.

A funeral will be at 2 p.m. on Saturday at the family cemetery in Peaceful Valley followed by a celebration of his life for family and friends at Chellowe.