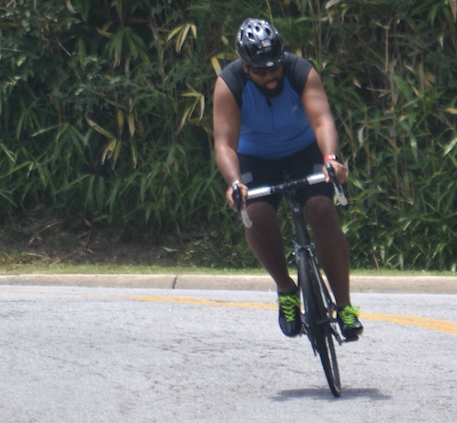 Cooper ended up raising more than $1,000 with donations split between the Great Cycle Challenge — an organization working to fight pediatric cancer — and the University of Virginia Children’s Hospital.

Cooper said he cycled in North Carolina, South Carolina and Virginia during more than 27 rides out of the 30 days in the month.

“Everyone was super friendly when I was out; they shared the road with me,” Cooper said. “It was definitely a communitywide event.”

Cooper said he intends to cycle every June to fight pediatric cancer. He said he was starting a show that would appear on YouTube that would also serve as a podcast.

“The goal is every month I’m going to identify a different cause, organization or person that I can ride for, and I’ll be interviewing people for the show on these rides,” Cooper said. “I have a few athletes that I’m already in touch with that have agreed. There will be some people from the private sector, some community organizers, but I will continue to ride for causes and different things that may transpire.”

He said beneficiaries could include someone who suffered a house fire.

“(I’m) definitely going to try to bring some variety to it,” Cooper said.

Cooper previously cited being a survivor of heart disease as a motivation to help raise funds to fight pediatric cancer.

Cooper’s blog can be accessed at https://medium.com/@taikeincooper.