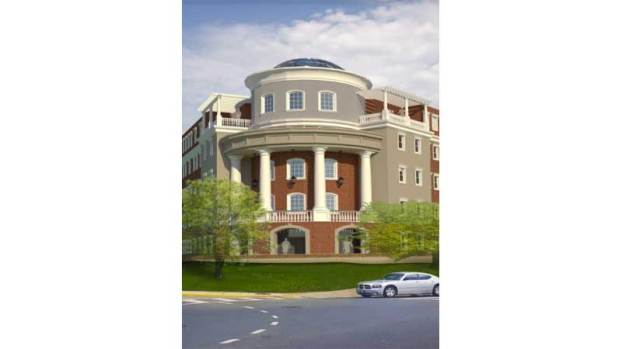 North Carolina-based developer Mike Kelley is working with Thompson & Litton to construct a 95,000-square-foot, five-story student apartment building that, along with its proposed parking, will encompass the area the four Martin homes currently occupy along Appomattox and High streets northeast of the roadway’s intersection with Griffin Boulevard.

Robert R. and Sherry P. Martin, who own four homes, one each at 510 and 504 High St. and 104 and 106 Appomattox St. on one acre of property, “have entered into a very exciting project with a developer from Winston Salem, North Carolina,” the two wrote in a letter to the Farmville Town Council, dated July 11.

The meeting, held at the home of Faye and Chuck Green, was prefaced by Chuck stating that the meeting was not, in his opinion, an attack on the character of Robert R. and Sherry P. Martin.

Faye said when she attended the July 12 meeting where the project was introduced to town council members and the community, she and the few others that attended were all shocked.

Attorney Harlan Horton said his first reaction to the proposal was “absolute shock and dismay.”

“The idea of putting 195 more people on that tiny piece of property right on High Street … didn’t seem right,” Horton said. “… I never felt like this was a problem with (Robert and Sherry), just really more of a problem with this idea of what they wanted to do with the land.” 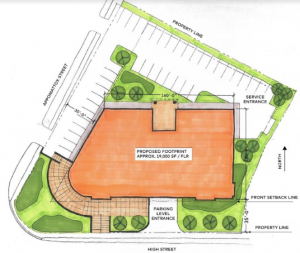 THOMPSON & LITTON
Pictured is the conceptual site plan depicts how the 95,000-square-foot building could be situated on the Martin’s property at High and Appomattox streets. Parking is depicted on the west and north sides of the building. A parking-level entrance is also proposed along High Street.

Horton said one of the biggest problems with the proposed site is changing the density of the R-3 Zone, which is what that area is currently zoned as.

The Martins, as the property owners, have formally requested the Farmville Town Council to repeal the density requirement of 10 units per acre for the R-3 Residential Zone.

“Right now what’s happening is Walk2Campus bought all the the properties on Buffalo Street and all around, and they did a fantastic job of reusing existing structures under the rules that existed then and now,” Horton said. “This is a violent departure from that. So what we have now is sort of this commercial area that has this general residential feel next to a true residential area.”

He said if that’s changed, “where would it stop on High Street?”

“I look at what Walk2Campus has done; I look to what other people have done,” David Crute said.

He also noted some of his concerns regarded parking and policing.

“If it’s predominately student housing, Longwood still has a liability for those students. How much control do they have for the students living in that house?” Crute said. “… I know Walk2Campus, the Longwood cops can go in there with probable cause — like a wild party or something like that — … what is this since it’s not Walk2Campus?”

He said there were a list of concerns residents of the avenues want to address about the property itself that would require answers.

Dr. Ann Yoelin, who lives in a house atop the knoll at intersection across from where the project would be located, said if the complex is built, it would drastically affect the quality of life of her and her husband, Adam.

“The density, the number of students … we see it every single day of our life there. It is a very busy corner of town, and I can’t even imagine what it would be like with 195 students and cars there,” Ann said. “I can’t quite wrap my head around that quite yet.”

She said she thinks if the proposal is approved, it will forever change the footprint of that part of town “which is so charming when you drive in.”

The proposal will be discussed at the Farmville Planning Commission meeting Wednesday.

According to Town Manager Gerald Spates, the homes will be demolished to make way for the new complex.

According to Spates the complex’s height would be only one story higher than the Martin’s house at the intersection of High and Appomattox streets.

“This project involves student housing, which already exists on our property and in almost all the surrounding properties … This will be a first-class project that the community should be proud of and will set us apart from other areas,” the Martins said in their letter to council.

The Martins appeared before the town council July 12 regarding the project.

“This is a project that Sherry and I have been working on for about a year … We think it’s a special project for the Town of Farmville,” Robert said.

The building will consist of three-bedroom apartments.

“The proposed project by a private developer to build new apartments at the intersection of Griffin and High streets will of course be something for the Town of Farmville to consider carefully through its normal process, with input from local residents,” said Longwood University spokesman Matt McWilliams in response to the proposal. “Longwood has no association with the proposal.”

According to a letter from Don DeBerry, an engineer with McCormick Taylor — the engineering firm recommending a roundabout be constructed at the intersection of Oak and High streets and Griffin Boulevard in front of the proposed new apartment complex to improve safety and lessen traffic congestion — the “potential number of pedestrian trips anticipated … don’t have a significant impacts on the results … So, the (project) should not be a problem.”

Chris Phillips with Thompson & Litton noted the proposal was “a conceptual plan (and) a conceptual idea.”

He noted the firm supported the “modification of the density of that zone.”

“We’ve very carefully looked at the context of this project,” Phillips said July 12 of the nearby student housing on Griffin Boulevard, calling the corner at the intersection “extremely prominent.”

Phillips said the proposed building and the property were an “optimal size to capitalize on the best value.”

“More than anything, the sensitivity to the town, to the university, to the neighborhood is at the forefront at the approach of our design,” Phillips said, calling them “very important factors.”

According to Spates, apartment buildings are permitted in the R-3 Zoning District.

“There’s going to be a series of public hearings,” Spates said, noting the conditional use permit and density requirement would have to be considered by both the planning commission and town council.