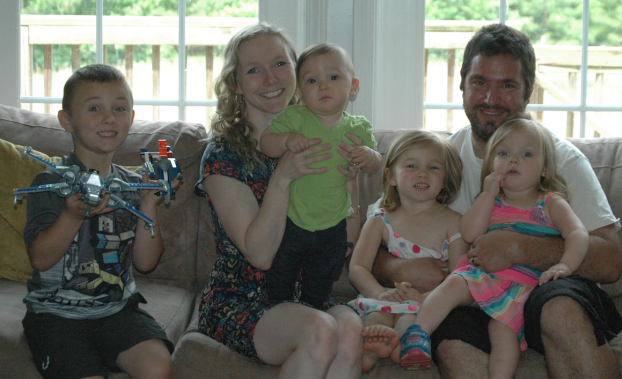 Pictured are, from left, Rylan Edwards, Mackenzie Cissell, Remington Cissell, Noa Edwards, Robert Cissell and Charlotte Cissell, all of Charlotte Court House. Robert said Noa and Rylan saved his life by calling 911 when a yak unexpectedly attacked him May 30 on their farm in Buckingham (photo by Emily Hollingsworth).

A telephone call to 911 made by two children might have saved the life of their stepfather, Robert Cissell, who owns one of the largest yak farms in the state with his wife, Mackenzie. The family lives in Charlotte Court House, but the farm is in Buckingham County.

Robert was attacked by a yak May 30 after loading a group of about 30 yaks onto a trailer.

There were about five yaks, plus a baby yak, outside of the truck, Robert said. He said he too quickly prompted the yaks, particularly the mother of the baby, into the trailer. The yak appeared to have felt threatened, Cissell said, and charged at him from some 20 feet away.

Robert was struck in the ribs, stomach, armpits and chin by the yak’s horns, knocking him down.

When the yak lowered her head to hit him, Robert said he was able to grab her horns and wrap his feet around the yak’s head.

“I sort of realized I reached a stalemate,” Robert said.

His 7-year-old, Rylan Edwards, and 4-year-old, Noa Edwards, were in the truck when Cissell cried out to Rylan to call 911.

Rylan grabbed the phone on the driver’s seat. The location made it difficult to get reception, and the call dropped several times.

Cissell said Rylan had to step outside of the truck and run to the back of the vehicle for a better signal. Rylan was able to notify the dispatcher, asking to send an ambulance and the sheriff had dispatchers call his mother to let them know what took place.

“I told them to bring a sheriff and gave them my mom’s number,” little Rylan said. He called several times afterward, making sure they were on their way.

“He was very calm,” Mackenzie said of Rylan. “He was calmer than I was. I raced over there, and he was on the phone with me most of the time.”

Robert noted there was some confusion at first between Rylan and the dispatchers as the situation was out of the ordinary.

“I think there may have been some confusion with the dispatcher with calling and saying his dad was attacked by a yak,” Robert said. “(It’s) not something they hear every day.”

Noa, while the incident was taking place, was prompted by Robert to climb in the front seat and honk the truck’s horn, which they hoped would distract the yak.

It’s didn’t work. But once Buckingham County Sheriff’s deputies and animal control officers arrived, they looked for various ways to separate Robert from the yak.

The situation was difficult, as letting go of the horns would put Robert in danger.

“If I let go, she would probably kill me,” Robert said.

After several attempts, officers were able to lift up a portion of the fence Robert was up against and where the yaks were kept, allowing Robert to slip out.

One of the police officers said, according to Mackenzie, that Noa and Rylan were some of the calmest kids he had ever seen in an emergency situation.

Their presence of mind may have saved Robert’s life.

He was taken to Centra Southside Community Hospital where he was checked for internal injuries and received stitches on his chin.

After Robert returned home and recovered, he said he took Rylan and Noa out for a treat and bought them Legos and dolls.

“I figured Chick-fil-A and Legos were a good trade,” Robert said.

“We always tell him he has to earn his Legos,” Mackenzie said of Rylan. “So, he earned his Legos that day.”

Mackenzie said she was unsure how Rylan and Noa stayed as cool as they did during the situation and said their actions prevented anything worse from happening.

“If you think about what could have happened, if the kids hadn’t been there … it could have ended up a very different way,” Mackenzie said.

Both Mackenzie and Robert said yaks are generally easygoing and docile, and Robert said that on the day of the incident, he was able to lead a pack of 25-30 into a truck walking behind them and speaking gently to them. He said the mother yak, post birth, may have felt threatened by the situation.

Robert told Noa and Rylan they were heroes.

“You make my wish come true,” Noa said after Robert called her a superhero.

Robert responded, “You made my life keep going, so it’s a fair trade.”

McDonald’s set to reopen next month