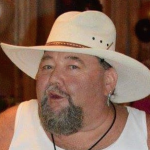 A life-long resident of Buckingham County, Carey was a member of First Baptist Church, Dillwyn, and the Booker Mine-Rock Mill Hunt Club.  He was the Manager of the former Jax Mini-Mart. Carey was well known for his love of hunting, dancing, music, motorcycles and western memorabilia but most of all for his love of family and friends.

In addition to his father, he was also preceded in death by his brother, R. Seay Davis; his “Uncle Ben” Seay; grandparents, Frank and Margaret Seay, Mattie Ruth Bergob and R. P. Rainey.

Funeral services were held on July 11, 2017 at the Dunkum Funeral Home with interment in the Dillwyn Town Cemetery.