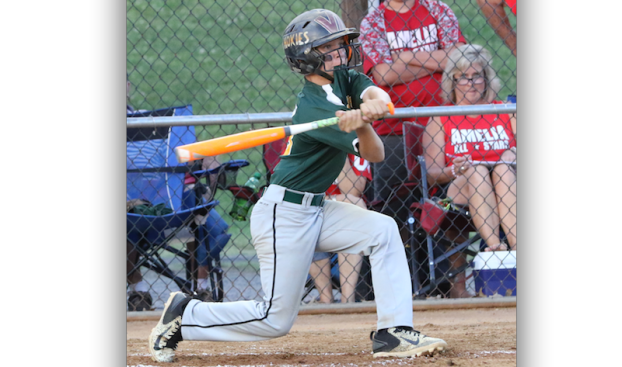 BCYL Majors All-Star Dillon Kimberlin is poised for a hit Thursday evening in Buckingham. He hit a three-run walk-off home run in the bottom of the sixth inning as his team won the District 4 title 6-4 against the Amelia All-Star team (picture by Titus Mohler).

The Buckingham County Youth League (BCYL) Majors All-Star team faced a 4-1 deficit entering the bottom of the sixth and final inning of the district title game Thursday night before staging a thrilling comeback in front of its home crowd to win 6-4.
After his teammates narrowed the lead of the Amelia All-Star team to 4-3, Dillon Kimberlin hit a two-out three-run walk-off home run in the District 4 Dixie Youth Baseball Major League All-Star Tournament championship game at Gene Dixon Sr. Memorial Park.

“These boys, they just didn’t give up,” BCYL Majors Manager Ben Gormus said. With a three-run deficit in the final inning, “we said, ‘Hey, we’ve been here before, and we’ve walked away with a win. We can still do it.’ And they believed in themselves. They believed in themselves, and we came away a winner.”
They put together multiple comeback wins during their 4-1 run in the district tourney.

The seeds of Thursday’s five-run rally appeared when Holden Tyson hit a double up the middle. Gormus substituted Cam Newton as the runner because of his out outstanding speed. George Hurt recorded a hit up the middle, and Newton reached home to make the score 4-2.

Hurt ended up on third base. Jake Carter hit a short dribbler down the first base line, and then showed remarkable savviness on the play that followed.
“The first baseman grabs the ball, and Jake Carter stopped running,” Gormus said. “He wouldn’t go to first.”

Normally expecting to tag the batter as he runs through, the first baseman suddenly had to either retreat to tag the base or advance further to tag Carter for the out.

“That bought time for George to score,” Gormus said, making the score 4-3 with one out.

Amelia achieved a strikeout to put two outs on the board, but then Justin Gunter got a single. Camden Allen followed with another single, and Gunter beat the ball to second base in a close play.

Kimberlin came up after this, and he launched the second pitch to him to right center field for the victory.

“None of these ballgames that we’ve played in this district were runaways,” Gormus said. “All of them were fought for to win, and that meant a lot to me and to the other coaches. The other coaches, my assistants, have a done a tremendous job. They work with these boys in practice, they work with them on the field, during the game. I take nothing from these coaches.”

“We’re proud of our whole organization,” Gormus said. “… The Majors had to come down to the last, last bit to get that, but we’re proud to be in that same category with the rest of them.”