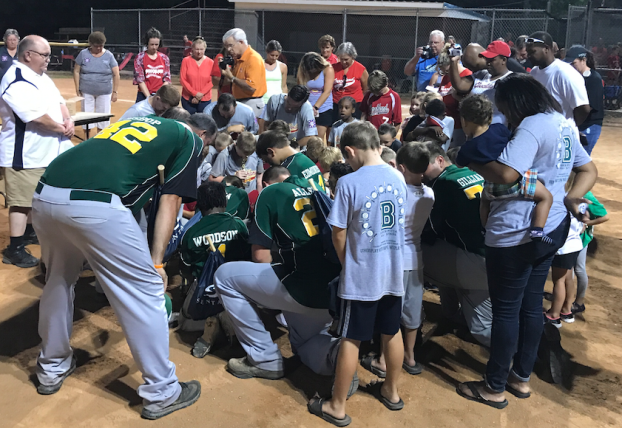 The BCYL Machine Pitch All-Star team gathers with its opponent from Goochland to pray on the field after a recent game, giving thanks for all the blessings the teams were afforded and for safety provided during play (photo by Ashley Carter).

With a trip to the World Series on the line Thursday, Buckingham took on the Goochland All-Stars, a fellow District 4 squad, and ended up falling 17-10.

“When it came down to it, of course, we had beaten Goochland twice in the district tournament, pretty handily both times,” BCYL Coach Pitch All-Star Manager D.D. Edwards said, adding that it is extremely difficult in any sport to beat a team three times.

He credited Goochland for tremendous play, including well-placed base hits.

“They played the best game I’ve seen them play throughout the districts or the state,” he said.

Despite having two losses in the double-elimination tournament, the BCYL All-Stars still had a winning record of 4-2 during the event. Edwards noted that he thought they were just not able to match the level of offensive prowess they demonstrated during their undefeated run in the District 4 tournament.

Buckingham opened its play in the state tournament July 14 with a 13-1 victory over the Amherst All-Star team, but “I didn’t feel like we really hit as well as we had in the first tournament,” Edwards said. “We hit OK, but not crisp and hard.”

“I think the defining moment of that tournament was when we actually lost to Timberlake,” Edwards said. “For the core group of this team, that was actually their first tournament loss.”

He said that he believes eight out of the 12 players on his team were part of the BCYL T-Ball All-Star squad two years ago that went undefeated in the district tournament, which is the highest level of competition available in T-Ball.

“They came into the district tournament this year, two years later, went through 3-0, started the first two (state tournament) games 2-0 and then ran into an extremely good Timberlake team,” Edwards said. “… But we fell short, and I believe that was a calling card, something to wake them up, saying, ‘Hey, we’re not invincible. Even though we feel like we have a good team, there are better teams on any given day.’”

The BCYL All-Stars rebounded July 17 with an impressive 16-1 victory over the Prince George All-Star team.

Edwards said that was probably the best game his team played both offensively and defensively during the tournament.

Buckingham’s game was rained out July 18, but it had a rematch the next day with Timberlake and ended up winning 14-10, setting up the championship showdown with Goochland.

For the tournament, the BCYL All-Stars had several players with on-base percentages of .500 or higher, with a few possessing percentages of .600 or .700 and higher. Ty Wilkerson led the way with a .778 percentage, Cole Murphy was at .765, Luke Gilliam was a .750 and Dawson Edwards was at .647.

“Defensively, we got complimented throughout,” Manager Edwards said.

He highlighted Ryland Carter at third base, Wilkerson at shortstop, Davion Woodson at second, Dawson Edwards at first, Murphy on the mound and Gilliam behind the plate.

Reflecting on how he will remember the team, Edwards said, “They are a family, and I feel so privileged and blessed to just be a small part of a few months out of their lives. Greatest bunch of kids you ever want to see. Their hearts are bigger than their bodies.”

He made a point to highlight and praise the work of his assistant coaches, Dusty Allen, Robert Bishop and J.T. Gilliam.

The Buckingham squad also made a powerful impression on people outside of its play on the diamond because of what it did after each game — pray.

“It got almost to be a routine,” Edwards said. “We didn’t have to say anything as coaches. Those kids went straight to that mound and invited the other team, and you can’t imagine how many people came up and just thanked us for that. And I just feel like something larger went on than just a baseball tournament.”

On behalf of himself and his team, Edwards lastly congratulated Goochland, wishing the team safety and the best of luck representing Virginia in the World Series in Mississippi this week.