Deborah Lillian Ayres-Brown, the granddaughter of the late Major James C. and Ruth H. Ayres, of Dillwyn, graduated from Western Albemarle High School (WAHS) with a 4.8 GPA and was recently honored for her excellence as a first-year student at the University of Virginia (U.Va.) with a distinguished Ridley- OAAA Academic Achievement Scholarship, which is awarded to African-American first- and fourth-year students with a 3.9 GPA and above.

“This is a new academic award created in conjunction with the U.Va. Office of African Affairs to honor top student performers, and is funded by the Washington and New York City Ridley Chapters,” officials said in a press release. “The scholarship is designed to increase Ridley’s support to African-American students.” 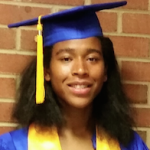 According to the release, Ayres-Brown was presented with the award at the Harambe II, OAAA’s annual event that recognizes accomplishments of first year students at U.Va.

The release cited Ayres-Brown was chosen as prom queen at WAHS, and was on the Homecoming Court at her high school for four years.

“She is a faithful member of the Chief Cornerstone Baptist Church and Junior Choir in Dillwyn,” officials said in the release. “Deborah is spending this summer in Rennes, France, in part, because of a CIEE Scholarship award for the Summer Intensive French Language Program, involving an intense French immersion program.”

According to the release, Ayres-Brown is learning all she can about the language and culture.