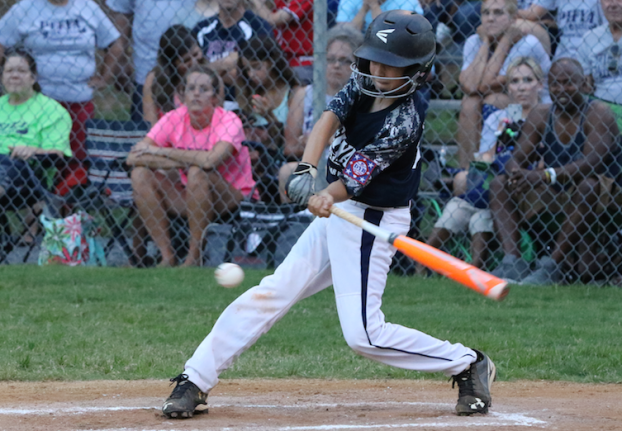 PEFYA Minors All-Star Noah Boehmer lines up a hit during the district tournament in Keysville. He has been part of a powerful offense that keyed a 3-0 start for the team (picture by Titus Mohler).

The Prince Edward-Farmville Youth Association (PEFYA) Minors All-Star team orchestrated a comeback for the ages Sunday to go into its Monday evening contest with a 3-0 record in the District 5 Dixie Youth Baseball AAA Minor League All-Star Tournament in Keysville.

The evening featured a battle of unbeaten teams, as PEFYA faced the Lunenburg County Youth Baseball League (LCYBL) Minors All-Star team and spent most of the game playing from behind.

Lunenburg led 8-3 after the first inning and 15-3 after the second. PEFYA put together an impressive nine-run rally in the third inning to make the score 15-12 going into the fourth. But then its bats grew quiet.

The LCYBL Minors extended their lead back to 18-12 in the fourth, and after a scoreless fifth, they made it 22-12 in the sixth and final inning.

Morgan said he and his staff would just tell their team, “‘Keep hitting the ball. … You can come back, just keep it up.’ And the sixth inning came, and then they just put it on.”

The PEFYA Minors scored two runs, but then two batters struck out. In five different instances after that, batters racked up two strikes, leaving the squad a strike away from defeat. But they faithfully either converted a hit or got a walk.

The team put together another nine-run rally to achieve an incredible 23-22 victory.

“It was the most unbelievable comeback I’ve ever seen,” PEFYA Minors Coach Mark Simon said.

The victory left the squad one win away from securing a berth in the state tournament.

Standouts during Sunday’s contest included Harold Landis, who hit a two-run home run in the first inning, and Austin Morgan, who hit a three-run double in the second.

Jack Jones got his first hit of the game — a double — in the bottom of the final inning and then came up again later, hitting the ball and beating the tag at first to successfully drive in the winning run.

PEFYA finished the game with 34 hits.

After the first two innings, Jerry Morgan and his staff decided to save their main pitchers for the next game. In their place, Austin Morgan, Jones and Keontay Booker gave the team what it needed, allowing only eight of Lunenburg’s 22 runs.

Simon’s clutch mound play and key hits from Kam Ligon and M.J. Holman led to an 18-15 victory over the Crewe-Burkeville All-Stars on Friday night.