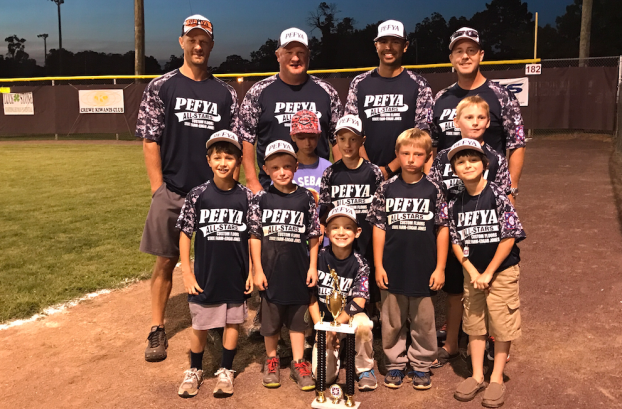 A team with remarkable heart

The Prince Edward-Farmville Youth Association (PEFYA) Instructional All-Star team left a lasting impact on its coaches even if it did not advance out of the recent Dixie Youth Baseball District 5 AA Machine Pitch Tournament in Crewe.

“This was one of those exceptional teams — not exceptionally talented — but these kids had more heart than any team I’ve ever been a part of,” Manager Jamie Davis said. “They were 12 kids that were pretty much about all the same. Nobody stood out, but they got better every single day they played together. It was really amazing to watch.”

He added that they played some exceptional baseball, “and they were just honestly the kindest and most passionate kids I’ve coached.”

Davis noted that sometimes passion can get ugly on the field, but in this case, his players’ passion translated into impressive composure and great effort.

In PEFYA’s first game of the tournament, it defeated the host Crewe-Burkeville All-Star team 15-4 on June 23.

Following a bye June 24, PEFYA resumed play the next day, facing the Dinwiddie Nationals All-Star team, which was unbeaten at the time and the emerging front-runner.

On June 26, PEFYA played an elimination game against the Dinwiddie American All-Star team.

“That was a game that we really played some of our very best baseball, and it went into extra innings,” Davis said.

He noted that Dinwiddie came back and took the lead in the top of the sixth. Then PEFYA tied it in the bottom of the inning. Dinwiddie responded again in the seventh to claim the win,

“But that was some really great baseball,” Davis said.

Describing his team as a great group of boys, the coach said that the parents were also outstanding — helpful and dedicated.

“The coaches that coached for me were terrific coaches,” Davis said. “Everybody brought something different to the table — four different personalities altogether.”

Davis, Edgar Jones, Alton Fowlkes and Nate Boehmer formed the staff that led the PEFYA squad of 7- and 8-year-olds.

“I know we were able to teach these kids a lot, but these kids taught us a lot, too,” Davis said.

The character of the team’s players, coaches, parents and fans did not go unnoticed by umpires and those who were part of the award selection committee, which gave the PEFYA squad the tournament sportsmanship award.

“It was definitely stated that it was greatly appreciated the spirit in which we played the game and how we treated those who we were playing against and the umpires and the image the fans put out there, which was supportive, even the comment of our fans clapping for other kids when they made great plays,” Davis said. “The true sportsmanship is not whether you win or lose — it’s how you play the game.”

He noted it was obvious his players loved playing ball, “so much so that after it was over with, several of the kids and parents said, ‘OK, when does fall baseball begin?’ That’s when you know they’ve had a good experience.”

Davis pointed out that the team veered toward the young end of the age division, so many of them could be back on the same squad next year.

“Normally, when you have an all-star team, almost all of them move on the next year,” he said. “This year, about half of them will return back to instructional baseball, or at least they could, unless their parents choose to move them up to Minors early.”