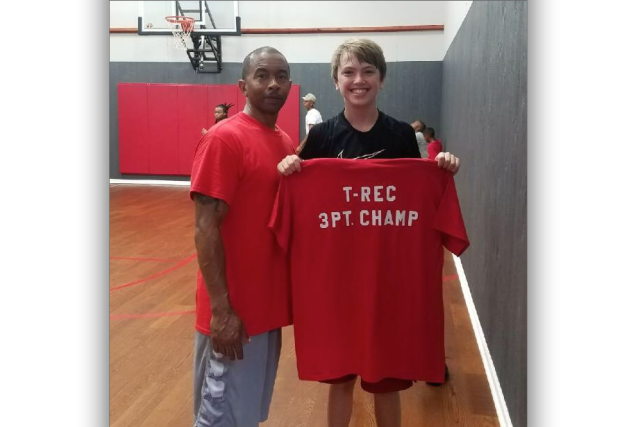 A new haven for hoops training

Tyrone Mosby had an idea to build a gym next to his house, giving him an avenue through which the serve the community. He shared it with his wife, she supported it, they went to work and 15 months later, they were hosting the gym’s grand opening.

The event took place Saturday at the 1,200-square foot facility on Browntown Road in Prospect, with approximately 75 people in attendance.

During the event, which included a three-point competition, Mosby gave visitors a tour of the building.

“It has a half-court basketball setup indoor,” he said. “I have a regulation goal. It’s at 10 feet now, but I can actually let it down to six feet to work with the youth.”

Mosby also gave a short speech during the grand opening, sharing what he is trying to do with the gym, “which is basically just give back to the community and to the youth. I want to work with the youth to help them develop in their basketball skills, be mature young men, young ladies.”

Mosby, who is head varsity boys basketball coach at Cumberland High School, is aiming to serve middle school- and high school-aged players from all of the surrounding counties.

“I definitely want to have camps in the near future,” he said. “I would like to have small, three-on-three tournaments. I would like to do something with some of the alumni that I have graduated with here also.”

He is presently offering weekly workout sessions from 6-8 p.m. for $50 per person.