Amy White became Central Virginia Regional Library’s Buckingham Branch Manager in May, but has already taken the position in stride, working to have the library meet the needs of all its patrons.

White grew up in Richmond and initially attended Virginia Tech, majoring in wildlife science seeking to become a veterinarian. She, however, went a different direction and decided to put her computer skills to a different career. 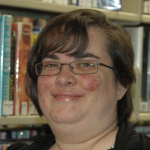 She said her interest in sciences, particularly relating to technology, led her pursuits into future careers.

White later moved back to Richmond and worked in the computer training industry, teaching computer courses for employees at Philip Morris and Capital One.

Budget cuts due to the recession prompted White to use her training and technology experience outside the corporate world.

When she applied for a position as a library assistant at the Buckingham County Library, it was her technology experience that opened the door for her.

Director of the Central Virginia Regional Library Rick Ewing, who served as branch manager of the Buckingham County Library, said he worked with White for a year before she was appointed branch manager.

“I’m really thrilled to have her as branch manager,” Ewing said about White. “She knows the library, she knows the branch, and she’s … spending a lot of effort getting to know the community.”

T&K Homes, a Farmville-based general contractor, now has a new home of its own. A ribbon cutting celebrating T&K Homes’... read more