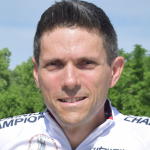 “There’s never been a bike race in Farmville since I’ve been here,” said Race Director Jordan Whiley in the release. “With the trail here, that should add interest in a cycling event.”

Whiley, who’s been racing bikes throughout the state for more than two decades, is finalizing plans for the event in Farmville, which he hopes will attract cycling enthusiasts from across Virginia.

The race, Whiley explained, is actually a time trial.

“It will be held on the High Bridge Trail,” he said. “Cyclists will go out individually, race a section of the trail and come back. The fastest rider in each age group will win.”

According to the release, the race is open to cyclists in the racing circuit as well as local participants, including those with physical disabilities who use hand cycles.

Whiley teaches special education at Bear Creek Academy in Cumberland where he also serves as administrator. He sometimes rides his bike 19 miles to work.

“I started cycling in my late 20s when I was a grad student at (the University of Virginia),” Whiley said in the release. “I’ve been racing for the past 20 years.”

The release cited among Whiley’s racing credits are seven state championships in his age category and a 12th-place finish in a national competition last year in North Carolina.

In the High Bridge event, cyclists from age 7 and up are eligible to enter.

“As long as you can ride a bike, you can come out and try it,” Whiley said. “Folks too young to be what we call master athletes — 35 and older — or too young to be juniors — under 18 — will be categorized by skill level from five, which is beginner, to one, the professional cyclists.”

According to the release, an awards ceremony will follow the race at the Farmville caboose across the street from the High Bridge Trail entrance on Main Street. Prizes will include medals, cash and merchandise.

“The Farmville Chamber is sponsoring the event with help from Centra Southside,” Whiley said. “The Friends of High Bridge Trail granted the use of the trail, Uptown Café will provide food for volunteers and Mainly Clay will help with awards.”

The release cited other businesses, including Third Street Brewing Company and the Outdoor Adventure Store, also plan to donate prizes for the event.

“The bike job is something I do part time,” he said of this working at the Adventure Store tuning bicycles.

Whiley is pleased with response to his idea for a cycling event in Farmville.

“My hope is that when people come to the award ceremony in town they’ll see there are many nice places to eat, and some may spend the night in a local motel,” he said. “Generally these races are beneficial to businesses in the area.”

“This event is utilizing High Bridge Trail State Park in a new way,” Stump said. “We believe it will highlight our great community. It’s an event that has potential to grow every year.”

For more information or to register for the High Bridge Trail Roubaix Time Trial, visit bikereg.com and enter the race name in the search bar.