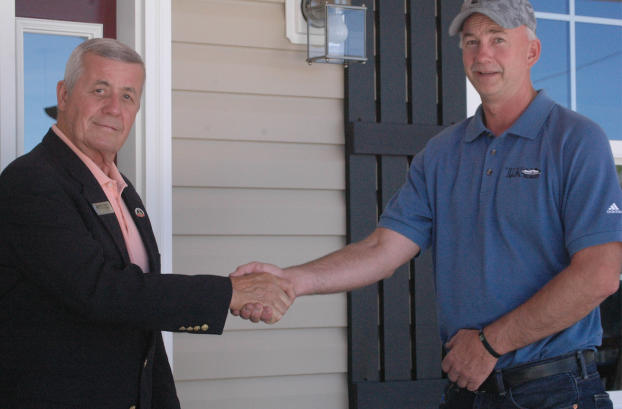 T&K Homes, a Farmville-based general contractor, now has a new home of its own.

A ribbon cutting celebrating T&K Homes’ new office space, which also acts as a model home to display its products and services, took place recently at 1671 Cumberland Road, across the street from New Life Church on Route 45.

In attendance, in addition to the firm’s owner and employees, was the District Five Supervisor Parker Wheeler and County Administrator and County Attorney Vivian Seay Giles.

The company was established 14 years ago. The new office is located in front of what had served as the company’s old office, a metal building that houses the company’s equipment.

His great-grandfather, Dunn said, was a builder and his grandfather operates Ayers Building & Supply Co. in Farmville.

The building of Dr. Vara P. Bonagiri’s office on Milnwood Road was built by T&K Homes, Dunn said, in addition to the duplex buildings near the Southside Virginia Family YMCA and Soaker’s Car Wash and Detailing in Farmville. The company has worked on more than 150 projects, according to its website.

The company also has an excavation crew, Dunn said.

The new office location, Dunn said, serves a dual purpose. In addition to being an office for the company, the location is also meant to be a model home.

Several displays, from flooring to wall crownings to lighting vary to offer clients an immediate, visual representation of what the company can offer.

“I’m excited to be able to offer a display house that has a lot of the different options to show around the house,” Dunn said.

T&K Homes partnered with Excel Homes, based in Pennsylvania, about six years ago. A representative from the organization, Bryan Phelan, drove from his home in North Carolina to attend the ribbon cutting.

“I think it’s great,” Wheeler said. “(I’m) always happy to see another business come into Cumberland County. I’ve known Kevin for quite a while. He should do well.”

Kevin Dunn Jr. said it was exciting to see the office location open.

A reception and a chance to tour the office space was offered following the ribbon cutting.