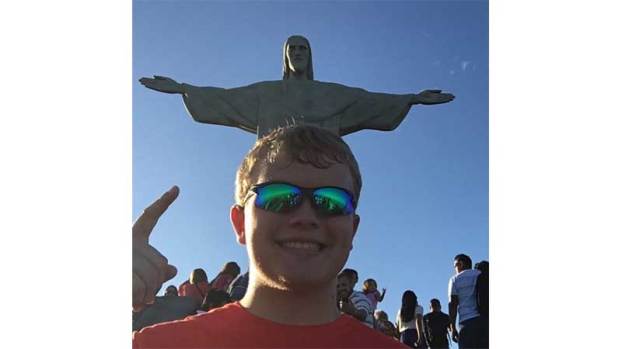 Preston Sutton stands in front of Christ the Redeemer, a landmark statue in Rio de Janiero in Brazil.

Sutton was one of nine students in the United States selected out of 9,000 applicants to join a U.S. Student Ambassador program. The group of nine students traveled to Brazil for a three-week trip in May.

The U.S. Youth Ambassador Exchange Program is part of international nonprofit World Learning, which establishes exchange programs for students and adults to learn about other cultures and apply what they learned to their own countries.

Sutton first learned about the program through his Spanish teacher, Martha Olmos. He said Olmos strongly encouraged him to apply.

Sutton said when he was notified by World Learning that he was one of nine students in the country selected for the exchange program, she was “just ecstatic,” Preston said. “As was I.”

Michael said Preston forwarded him the email saying he was accepted into the program while Michael was at work. He said he read it with Preston later on and “didn’t have words.”

“It was an amazing accomplishment,” Michael said. “Nine thousand applicants and one of nine to be selected to go to Brazil. Of course, I was a super happy dad.”

He said Preston had the rare opportunity to not only represent Cumberland, but also the United States. He said this was the first time he had flown on a plane and left the country.

Preston said during the three-week trip, he and the eight other students, who came from different places in the United States, got to visit the U.S. Embassy, meet U.S. Ambassador P. Michael McKinley and toured the U.S. Consulate Office in Rio de Janeiro.

Preston said while he learned some Portuguese, describing some of the difficulties of the language barrier, he said he formed incredible bonds with the other ambassadors in addition to the host family he stayed with.

“We soon became great friends,” Preston said of the group of student ambassadors.

Preston noted certain cultural differences, including that lunch, rather than supper, was the largest and most celebrated meal and that extended family members kept in touch, often visiting one another daily.

“It was amazing to see how close their bonds were,” Preston said about the relationship between members of his host family.

The trip’s purpose, Preston said, was to focus on comparing issues in Brazil with those of the United States.

Preston and the other students could then take insight back with them to find new ways to solve issues important to them.

The trip, Preston said, was not all business. The group also got to tour Rio de Janeiro, visiting the landmark Christ the Redeemer statue and travel through a portion of the Amazon rainforest.

“Before the program, I was considering a career in international affairs, international law,” Preston said. “This has only benefited (and) only inspired me more to want to become some sort of foreign affairs officer.”