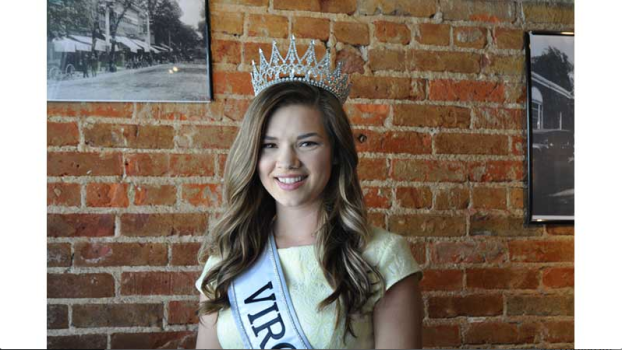 Buckingham native Olivia Rumsey was recently crowned Miss Virginia United States, and will travel to Orlando on Saturday to compete for the national title of Miss United States (photo by Emily Hollingsworth).

Olivia Rumsey remembers the first pageant gown she competed in as a teenager.

It’s something she still owns. It holds meaning for her far beyond a reminder of her journey into competing in pageants, where she most recently took the title of Miss Virginia United States.

It was the only item in her room that survived when she and her family of five lost nearly everything in a fire that struck their Buckingham County home several years ago.

Rumsey, since that time, has lost several family members, in addition to close friends in vehicle accidents.

She described feeling numb at the time, and carrying the weight of being a role model for her younger siblings.

“For me, I had to really step up and be a role model to them … and keep us together because it was such a hard time,” Rumsey said.

Keeping in mind the values that pulled her from a difficult place, Rumsey now uses her platform of Miss Virginia United States to encourage others who may be struggling.

Rumsey was awarded the title in April following a weekend-long pageant in Roanoke, where she and other contestants took part in an interview, modeled evening gowns, swimsuits and responded to on-stage questions from the competition’s judges where contestants didn’t know the judge’s questions in advance.

Rumsey said she felt initially nervous, but now has renewed confidence for the national competition, of which she will take part in Saturday.

The competition, held in Orlando, Florida, will result in one woman crowned Miss United States.

The Miss United States organization, differing from the Miss USA pageant, which will hold its national competition in September, works to empower young women and give them a platform for causes important to them.

Rumsey, who was in Miss Virginia United States pageant previously, said the organization values the person and cultivates strong women.

“This organization has been so down to earth, and so sweet and they are just someone who actually cares,” Rumsey said, noting the sometimes overly competitive nature of other state and national pageants. “(The organization) is so positive, so empowering and they really want to help you in any way they can.”

Rumsey is currently a student at Virginia Commonwealth University, and recently declared her major in marketing and hopes to open a clothing boutique in the future.

She works for Caryn’s Bridals, Formals & Tuxedos in downtown Farmville.

Rumsey’s platform, “We Rise by Lifting Others,” focuses on encouraging others through her own story.

She enjoys the platform for its broad nature, allowing her to connect with a wide range of people.

“My platform’s all about just not letting your past or whatever you’re going through let you down,” Rumsey said. “that it doesn’t define your future or where you are going in life in general.”

One value she has carried from her experiences is putting her family first and not worrying about trivialities.

“Me and my siblings used to fight about small things like clothing and makeup, and after that moment I realized there was no point in doing all of that,” Rumsey said.

She hopes her story will give people the encouragement to see past overwhelming circumstances.

“I want to let them know that no matter what they’re going through, it’s not the end. It will get better, and I just want to share my story with them and let them know how I overcame those two years,” Rumsey said.