Hampden-Sydney College Head Lacrosse Coach Jason Rostan and five Tigers were honored by the Virginia Sports Information Directors as the organization handed out its all-state awards. 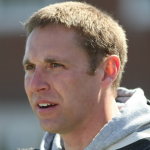 “I was excited for our student-athletes that were honored with postseason accolades as they were all certainly very deserving,” Rostan said. “However, I also know that awards go as the team goes; we were fortunate to have a great season as a team, and every member of our program played a huge role in the success we were able to achieve.”

Rostan received the state Coach of the Year honor after having also been recognized by the Intercollegiate Men’s Lacrosse Coaches Association as leading the All-Region Coaching Staff of the Year for the South Region.

The Tigers posted a record-breaking season in 2017, producing a school-record 16 wins, shattering the previous record of 13. H-SC won the Old Dominion Athletic Conference (ODAC) Championship for the first time since 2001, and the Tigers earned their first NCAA Tournament win since 2003. They also broke the school record for single-season points (486), goals (307) and assists (179).

Both Levin and Brown broke the previous school record for points in a season (78). Brown recorded 87 points, breaking the school record in assists with 44 and the record for season midfielder points. His 44 assists were the 15th-most in the nation this season while his 87 points were good for 21st.

Levin finished the year with 91 points on 34 assists (fifth-most in school history) and a school-record 57 goals. Levin ranked 13th in Division III in total points and 23rd in goals scored.

Henry was one of the premiere defensemen in the South this spring. Consistently tasked with defending an opponent’s top offensive threat, he played a prominent role in helping shut down or limiting several All-ODAC players and potential All-Americans.

Duncan Morris and Chandler Shaheen were picked to the all-state second team and were also second team All-ODAC selections.