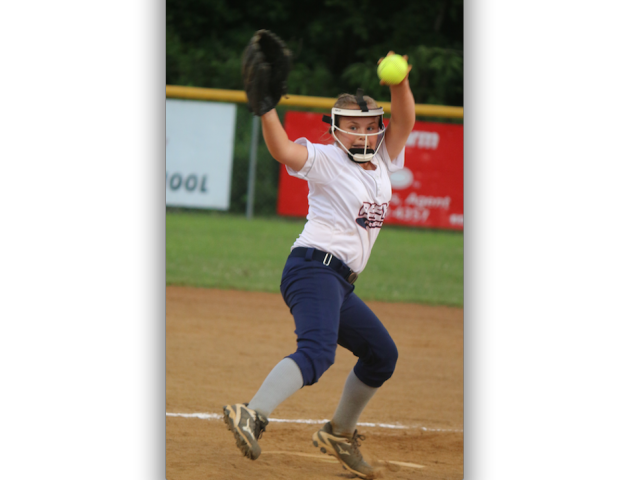 Ponytails All-Star Danner Allen pitches for her team during the recent Dixie Softball Ponytails District 1 All-Star tournament in Farmville. She was part of a trio of pitchers that helped PEFYA win the tourney. (Photo by Farrah Schmidt)

The Prince Edward-Farmville Youth Association (PEFYA) Ponytails All-Star team was nothing short of dominant on its way to winning the Dixie Softball Ponytails X-Play District 1 Tournament it hosted at PEFYA’s Field of Dreams complex.

The PEFYA Ponytails squad went 3-0, outscoring their opponents 38-6 across three mercy rule-shortened victories to advance to the state tournament in South Hill on July 14.

Larry Conwell, the team’s head coach, was not surprised by the performance.

“These are a good group of girls,” he said. “They’ve been playing together for a while. They work hard for what they’ve got. They practice hard.”

PEFYA clinched the tournament title Monday with a 14-4 victory over the Dinwiddie All-Star team.

On Saturday, PEFYA won its first contest against Dinwiddie 13-2, and Friday, PEFYA opened its tournament run with an 11-0 win over the Clarksville All-Star team.

Explaining the key to his team’s dominance, Conwell said, “We had good pitching.”

He began his list of standout pitchers with Alyson Lucas. Danner Allen and Kyla Edmonds were also stars in the circle.

PEFYA paired this strength on defense with remarkable productivity on offense.

“When it came to our hitting, every girl had multiple hits throughout the tournament, so that was impressive, I thought,” Conwell said. “And we only struck out (nine) times the whole tournament as a team. You score (38) runs and you only have (nine) strikeouts, you’re doing good.”

“I don’t think anybody struck out twice,” he said. “We were patient at the bat, and they just played good as a team.”

The coach said his team’s opening 11-0 victory was its best game due to stellar defense.

“I think the first game set our tone,” he said.

PEFYA’s roster has a relatively even mixture of older players and youth.

“Half the team could move up next year, and half of them couldn’t,” Conwell said. “We’re in the middle.”

He expressed pride in his players for winning the district championship, “but I was more proud because they won the sportsmanship award,” he said.

Conwell noted that the umpires helped decide who received the award based upon their observations of how a team’s players, parents, fans and coaches behaved during the tourney.

The PEFYA Ponytails look to continue their run of success July 14 when they begin play in the Virginia Dixie Softball Ponytails X-Play State Tournament in South Hill.