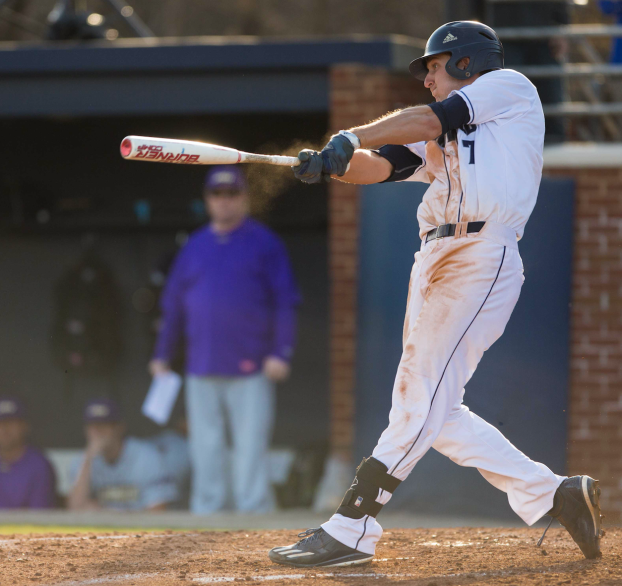 MIKE KROPF | LONGWOOD UNIVERSITY Longwood University junior shortstop Michael Osinski might be back next season, but he now has the option to sign a minor league contract with the Red Sox after they drafted him Wednesday.

Longwood University junior shortstop Michael Osinski was drafted Wednesday in the 31st round of the 2017 Major League Baseball First-Year Player Draft by the Boston Red Sox, becoming the 10th player drafted out of Longwood in program history.

“It’s exciting to see Mike get a chance to pursue a childhood dream,” Longwood Head Coach Ryan Mau said. “Our program strives to develop players on and off the field. We are very proud that he has earned this opportunity to continue to play baseball at the next level.”

Osinski is the second Longwood player drafted by Boston in the past three years, following in the footsteps of his former teammate Kyri Washington, whom the Red Sox drafted in the 23rd round of the 2015 MLB Draft. The 2016 Greenville Drive Player of the Year, Washington is currently playing with the High-A Salem Red Sox in his third season of professional baseball.

A 6-foot-2-inch, 185-pound infielder from Vestal, New York, Osinski was selected with the 941st overall pick following a junior campaign in which he hit .308 with a team-leading 14 doubles, three home runs, 36 RBIs and 35 runs scored in the middle of Longwood’s lineup. He swiped 13 bases in 14 attempts and logged a .360 on-base percentage, drawing 17 walks compared to just 27 strikeouts.

Osinski has manned the shortstop position for the Lancers since the first game of his career, starting 161 games over the past three seasons. He owns a .298 career batting average, and this past season he set career highs in slugging percentage (.443), extra-base hits (19), RBIs and stolen bases.

The Red Sox announced Osinski as a third baseman, making him the 44th player drafted at his position. He was the second Big South Conference player drafted, following eighth-round pick Kyle Zurak of Radford University.

As a junior with one year of college eligibility remaining, Osinski now has the option to sign with Boston or return to Longwood to play out his final year in 2018. The signing deadline for 2017 MLB draft picks is July 15, 2017.

The MLB Draft consists of 40 rounds and this year featured 1,215 picks.