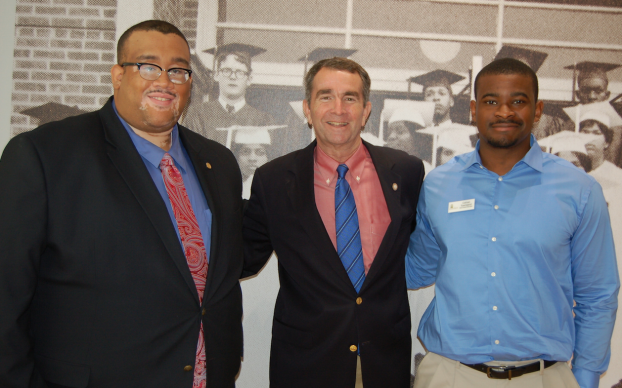 Lt. Gov. Ralph Northam was given a private tour of the Robert Russa Moton Museum on Monday by the museum’s Interim Director of Education and Public Programs Cainan Townsend and Managing Director Cameron Patterson.

“I’ve always been a big fan of Barbara Johns,” Northam said following the tour. “I speak about her as I go around the commonwealth because I was a part of the desegregation of schools when I was in the fifth grade over on the Eastern Shore. You know we just recently named the Attorney General Building in Richmond after Barbara Johns, so I know a lot about the history but I have never been to Moton … It’s just really neat to be here to put all of this together.”

On April 23, 1951, Johns led a student walkout of the R.R. Moton High School in protest of the county school board’s lack of action regarding unequal educational facilities.

During the tour, Northam — the Democratic nominee in the race for governor — described the desegregation he witnessed on the Eastern Shore.

“It was interesting when they desegregated schools. A lot of the families chose to take their children to private schools,” Northam said.

He said his parents thought it was important for him to stay in public schools.

“I think there were a lot of Caucasian, white families that didn’t want it, but there were also some African-American families that were kind of used to having their schools, but as you know it was the best thing that could have ever happened,” Northam said. “I was just glad to be a part of that process.”

Patterson said Northam’s team had reached out to the museum over the weekend.

He said the museum appreciates Northam’s support and advocacy.