Michael Robert Steinruck, 37, of Roanoke, died June 7, 2017 at Roanoke Memorial Hospital with his family by his side.  He was born February 9, 1980 in Charlottesville, a son of Margie Allen Sams and the late Robert Earl “Bobby” Steinruck. 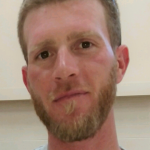 In addition to his father, Michael is preceded in death by many other family members and close friends.

Funeral services were held on Monday, June 12, 2017 at 11 a.m. at Bethlehem Baptist Church with interment in the Old Dominion Memorial Gardens located in Roanoke at 3 p.m.

Memorial contributions may be made to The Rescue Mission of Roanoke.