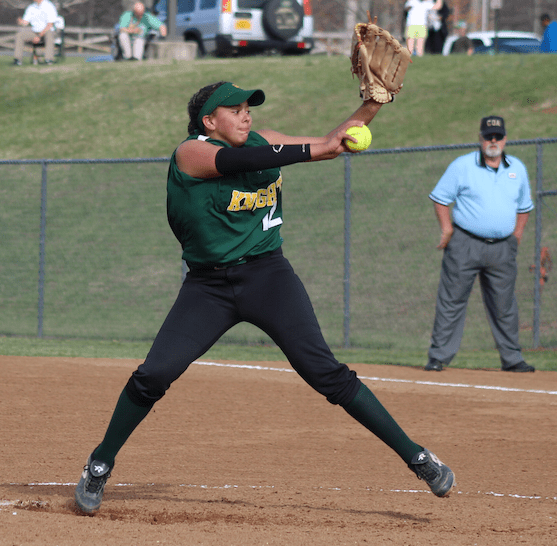 Buckingham County High School’s 9-8 loss to host Gretna High School in the Courthouse Conference 37 softball tournament semifinals Friday was difficult, but it did not overshadow a season of forward progress for the Lady Knights.

“I will remember this team because they’re the team who started believing in what we have been coaching for the past two years,” Buckingham Head Coach Mark Christian said. “Last year’s group pretty much started the foundation. This group, they have solidified the foundation, and they took it another step higher for the program.”

Christian noted that Buckingham had been below .500 for a good while until the recent resurgence.

Highlighting the kind of play that accompanies the buy-in to what a coaching staff is teaching, he said his players will “lay out for a ball. They would do those things that need to be done. They worked very hard.”

He acknowledged that the third-seeded Lady Knights’ lone playoff game against No. 2 Gretna was a tough one.

“It was a good ballgame, and it went back and forth,” he said. “If you look at the stats, we had three errors, they had two, and you know how it goes. Those things come back to get you. But I’m super proud of the girls. They had a good year.”

Christian and his staff impressed upon the girls the importance of being able to grind out wins.

“Most of our games were tight, and the early games of the season that we lost, I told them, I said, ‘They’ll pay dividends at the end,’” Christian said. “And it did. We won … five of the last seven games we played.”

He knew exactly where to start in identifying season highlights for Buckingham.

“Mia Garrett’s no-hitter is one,” he said. “That was a good momentum-builder for her, helped her, because she’s a freshman. For her to do that as a freshman, that’s pretty awesome.”

She threw nine strikeouts while pitching all five innings of a 10-0 victory over visiting Prince Edward County High School on April 18.

Christian praised senior shortstop Elizabeth Love for her clutch home runs, and he singled out senior Mattie Kish Heslip and sophomore Jayda Chambers for their standout defensive play in the outfield.

The coach noted his team will miss Love, Heslip and senior catcher Alexis Crews, who have all graduated.

“They were all very big players for us this year, brought experience and made plays and all that good stuff,” he said. “But we had a lot of young talent as well, girls that we pulled up, so that’s why … I have a lot of good hope for next year.”

Because Garrett will be back in the circle as a sophomore and Emily Gormus as a senior, Christian said he thinks the team will be even stronger.