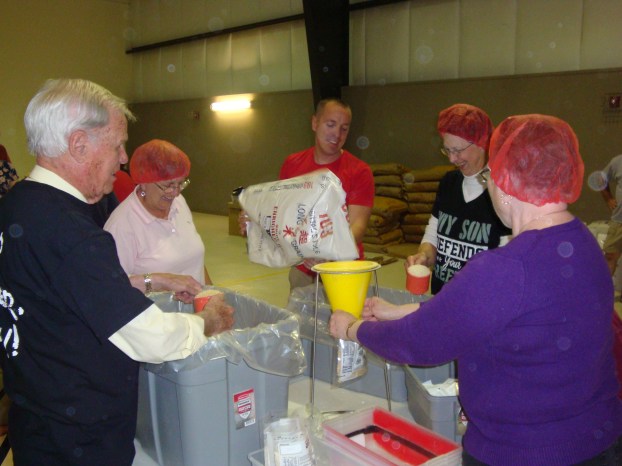 On May 7, the James River Baptist Association (JRBA) held its ninth meal-packing event for Rise Against Hunger (RAH). According to a JRBA press release, RAH is an international hunger relief organization that distributes food and life-saving aid to the world’s most vulnerable people, and works to end global hunger by 2030. The release cited that 792.5 million people across the world don’t receive enough nutrition to lead an active, healthy life.

“In 2016, 376,000 volunteers around the globe put their hands on hunger through Rise Against Hunger events resulting in one million lives being nourished through their meals and other aid,” officials said in the release. “The James River Baptist Association became involved in this outreach in 2010.”

According to the release, since that time, they have raised over $58,000 and packaged 216,053 meals for hungry people in the Ivory Coast, Haiti, Uganda, the Philippines, Vietnam, Zimbabwe, Cambodia and Nicaragua.

“Maysville Baptist, individuals and the Baptist General Association of Virginia have partnered with JRBA to make this possible,” officials said in the release. “One hundred sixteen volunteers, representing 12 area churches, gathered at Maysville Baptist Multi-Purpose Center to work cooperatively in getting the meals packed and ready for shipment.”

The release cited that people of all ages worked on various tasks to get the job done.

“From putting labels on boxes to carting 50 pound bags of rice and soy to multiple bagging stations, there was a job for everyone,” officials said in the release. “The 32,184 meals packaged at this event are tagged to go to Orphan Network in Nicaragua.”