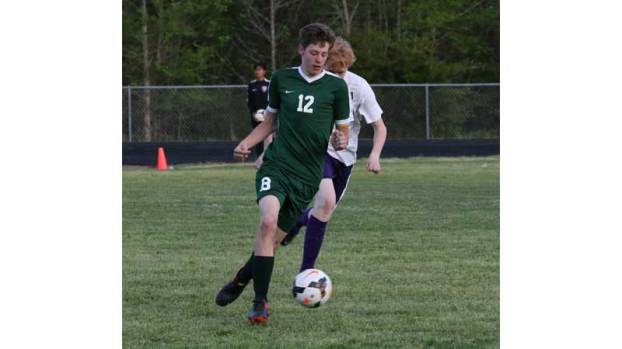 The 2017 campaign was a difficult one for Buckingham County High School’s varsity boys soccer team, which finished with a 1-14-1 overall record.

“I really thought we were going to be better, and we did not progress as a team like I thought we would,” he said. “At times we were very good and at times we just weren’t. We were just inexperienced as a whole, and that showed on the field.”

The Knights did have heart, though, which was on clear display during their season-ending 11-0 loss to host No. 1 Appomattox County High School in the Courthouse Conference 37 tournament semifinals.

“We knew it was going to be difficult,” Whittington said of the playoff game against the Raiders. “Appomattox is a very good team — well-coached with good players. And we went into the game with 11 dressed players, and two had to be taken off due to injury. We finished with nine players on the field. But I was very proud of my guys because they never quit; they never stopped playing hard.”

He noted that the season’s low point for him was a 7-0 home loss to the Nottoway High School Cougars on May 5.

“We had played them the week prior and lost at Nottoway 2-0 off of two defensive mistakes,” he said. “So I really thought we had an opportunity to beat them, and to play as poorly as we did was very disappointing.”

Whittington said he thought the high point of the season for the Knights was, for obvious reasons, their 3-2 home win May 10 against Cumberland High School.

“To see the relief on their faces was a huge highlight for me,” he said. “To know they weren’t going to go winless working as hard as they did, it was just a great feeling.”

Expressing pride in all of his players, the coach highlighted a few for particularly standout performances, starting with midfielder/forward Ethan Caldwell.

“He played everywhere on the field for us and was probably our most consistent player,” Whittington said, adding that the versatile junior scored eight goals this season. “He was the one who always worked as hard as he could because this game isn’t just a game to him. He loves it with every fiber of his being, and that is such an inspiration to see.”

Whittington praised junior midfielder John Crews, who recorded three goals this year and “did a great job at his position in both moving the ball forward and playing defensively to keep the ball out of our side.”

Sophomore defender Daniel Wood also received recognition from the coach for his strong defensive play and reliable performances fueled by consistent effort after having been away from soccer for a few years.

With no seniors on its roster this year, Buckingham will have continuity going into the 2018 season.

“All of our players on our current roster will have another year to develop, and we have a good group of freshmen coming in next year,” Whittington said. “So I am hopeful that we can turn this around and get it going the way we want it to go.”