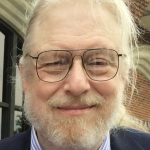 He was a graduate of the University of Richmond, earning a degree in Business. For more than 30 years, Mr. Weinberg worked as Budget Analyst with the Virginia Department of Game and Inland Fisheries.

A Past Master with the Freemasons and other service organizations, Mr. Weinberg was a committed member of Fraternal Lodge 53, where he became the Worshipful Master of the Lodge in 1983. Friends recall him as “a very generous and giving person” with a “great sense of humor.”

In addition, Mr. Weinberg worked tirelessly as a volunteer coach with Tuckahoe Little League for more than 20 years. Several of the players he coached were drafted by Major League Baseball teams, including 2011 Cy Young Award winner, Justin Verlander. After retiring from coaching, he continued to work with pitchers, giving countless hours of personalized instruction for free.

Mr. Weinberg enjoyed a lifelong passion for the music of The Beatles. His infectious enthusiasm for the band’s cultural and musical significance served as a “master class” for friends young and old, who developed a deeper appreciation of familiar songs, guided by his expertise. His favorite song was “Imagine.”

Son of the late Joseph A. Weinberg, he is survived by his mother, Charlotte Bloom Weinberg; brothers, Jeffrey and Marc; sister, Marcia; nephew, Eric; and nieces Alison, Rachel, and Emily.

In lieu of flowers, donations should be made to the American Heart Association and Virginia Holocaust Museum.

Clair Bugg Holland, 93, passed away peacefully in her home surrounded by her family on Thursday, June 15, 2017. Born... read more