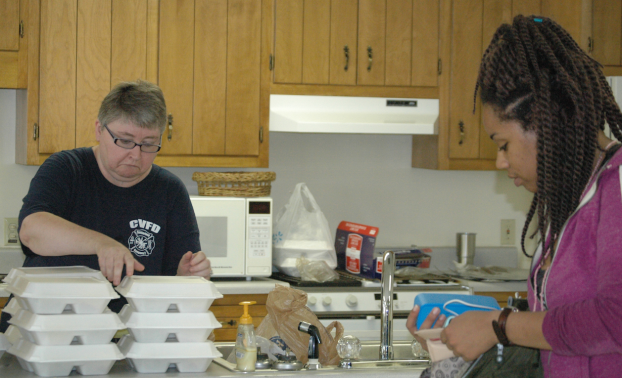 The chicken barbecue held Saturday, which came at $7 a plate, provided a filling summertime meal of a barbecued chicken leg and thigh, a biscuit, green beans, a brownie and a beverage. Members handed out dinners or pieces of chicken on their own for $4 each to those walking in between noon-2 p.m. at the Cumberland Volunteer Firehouse on Old Buckingham Road.

According to Auxiliary Secretary Emma Pfeiffer, the event netted approximately $1,000 that will be used toward the fire department.

“We are very grateful for the support of the community at our fundraisers, and truly appreciate our firefighters who cook the chicken and stir the stew and always help us set up for our events,” Pfeiffer said.

A softball tournament took place Saturday in the field next to the firehouse. Some stopped by after the game, while others took their lunch breaks to pick up a dinner before going back to work.

Auxiliary member Peggy Timberlake said she and other members volunteered to take meals to people who have ordered them in advance, along with those who couldn’t leave work on the day of the barbecue.

A fireman’s boot that’s been recrafted to store money was kept on the counter during transactions so people could leave tips. The boots, part of an initiative called “Fill the Boot,” are located in retail stores across Cumberland.

Lora Smith, treasurer of the auxiliary, said the events are meant to support area firefighters and the department.

“We’re only collecting money for the benefit of the fire department,” Smith said.

The current auxiliary was established in 2007.

FARMVILLE — The Riverside Chest Clinic on West Third Street in Farmville will close at the end of June, according... read more