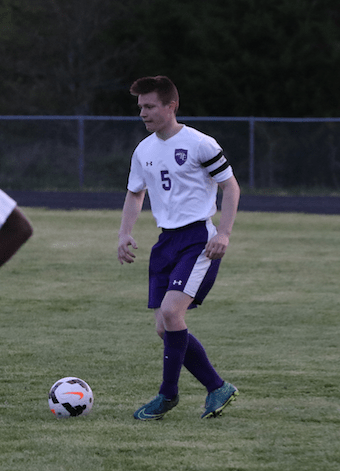 Prince Edward County High School’s varsity boys soccer team has become synonymous with disciplined play and the wins that follow, but its success during the 2017 season was surprising.

“After graduating 15 players from the 2016 team, most teams would expect the following season to be a rebuilding year,” Eagles Head Coach Devin Pierce said. “None of the returners or coaches from other schools expected a nearly undefeated season for the Eagles this year.”

And yet, that is what the Eagles produced, going 15-1 in the regular season and finishing 17-3 after their postseason run was complete.

“I believe that the new, raw group of players that came out this year worked extremely hard during preseason and throughout the entirety of the regular and postseason to achieve the success,” Pierce said. “The returning players — Chaney Sheehan, Craig Burns, Brennan Deitrich, Apa Diaz and Keillor Libby — deserve the most praise as they helped to mold the minds and skills of the newcomers.”

In the Quad Rivers Conference 34 tournament, Prince Edward went 2-1, falling to host Goochland High School 3-1 in the championship, a loss that Pierce said was fueled by a lack of Eagles team play.

In the Region 2A East tournament quarterfinals, the Eagles faced Maggie L. Walker Governor’s School (MW), the opponent that Pierce described as his team’s toughest all year.

“From the first minute to the 80th, we made MW work for it, and at times we were very hard to break down,” he said. “However, although we played and fought with heart, all the hard work was negated by a lack of quality at times. The overbearing pressure that MW applied caused us to cough up the ball and make careless errors.”

Prince Edward trailed 3-0 at halftime and ended up falling 7-0.

Though this was a tough end to a successful year, Pierce pointed to his team’s only regular season loss as the season’s low point. It was a 4-1 home loss to Goochland on Senior Night.

“Craig Burns, who was a four-year starter, had never lost a regular season game until that point,” the coach said. “He and the other seniors were devastated, and it was hard to watch them become so emotional even before the match had ended.”

Pierce’s high point of the season came at the All-Conference 34 voting meeting, during which some of those same seniors were honored, along with one of their junior teammates.

“As the eight coaches of the conference deliberated for Player of the Year, of the four nominees, three were from Prince Edward,” Pierce said. “Brennan Deitrich, Chaney Sheehan and Craig Burns were all regarded in high praise by the other coaches as players. In the same conversation, the sportsmanship and character of each player was discussed as well. I was a very proud coach during this time.”

“I was overly joyed!” Pierce said of his reaction to the news, noting that Burns is the only player on the Eagles roster that has played for the past four years. “He is a humble, hardworking and honest young man, and I’m glad the rest of the coaches could agree.”

“On the field, Craig was a tenacious defender,” Pierce said. “His speed was unmatched and his ability to judge and win any ball in the air made him a brick wall.”

This was Burns’ second year on the All-Conference 34 first team.

It was the first year for Deitrich, a senior forward, who led the conference with 35 goals and also had 15 assists.

“He was a big, physical presence with great feet and high IQ that knew how to get the ball with his back to goal and turn to run at defenders,” Pierce said.

It was also the first year on the first team for Sheehan, a junior midfielder who scored 12 goals and handed out 25 assists.

But Pierce said it was Sheehan’s leadership ability that stood out to other coaches, and he praised Sheehan for his humility and for being an encourager.

“Being the star of the midfield meant that a lot of our success started and ended with him,” the coach said. “Other coaches noted how professional and respectful he was throughout even the toughest games.”