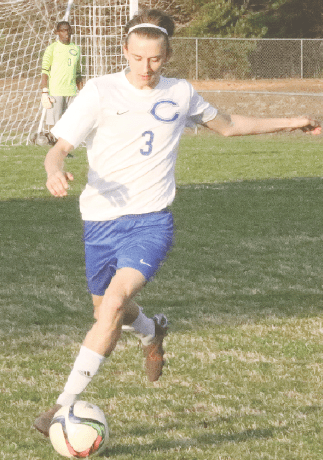 TITUS MOHLER | HERALD Cumberland senior Matthew Bapties made the switch from forward to center defender this year and was one of three Dukes to make the All-Conference 42 second team.

Dukes recover to start a change in culture

The 2017 season was one in which Cumberland High School’s varsity boys soccer team came back together after difficulties near the beginning of the year.

“This was definitely an interesting year for the guys,” Coach Heather Sutton said. “There were a lot of underlying issues that needed to be ironed out pretty early on just in regards to dynamic and personalities.”

She said the task at hand was getting players to come together and see each other as family and as teammates when they were out on the field.

Sutton noted it was disappointing that they did end up losing a few players from the roster, but the circumstances did eventually improve.

“There was definitely a lot of growth that happened after some of these things kind of transpired, and they really started to bond back together,” she said.

The challenges were particularly frustrating after the season began on a high note with a 5-3 home victory over Amelia County High School.

“We probably started to move forward three quarters of the way through the season,” Sutton said.

Though the sixth-seeded Dukes fell 4-2 to host No. 3 Middlesex High School in the first round of the Conference 42 tournament, Sutton had renewed confidence in them based on what they were doing on the field.

This confidence stemmed from a resurgence that happened despite a couple of key players being sidelined, including senior center defender Matthew Bapties, who was injured.

“A few of my sophomore basketball players stepped up in a huge way,” Sutton said, “and that’s kind of when the dynamic started to shift and I think they realized, ‘Hey, we don’t need the kids that have played soccer their whole lives, we just need to play together.’”

These sophomores included defender Noah Bland, midfielder Isaiah Carter and midfielder Kaijhaun Copeland. And Sutton said some of their friends may join them on the team next year, signaling a positive culture change for the team and the sport.

Cochran aided the team as both a center and outside midfielder, while Bapties, who had usually played forward, moved to the other end of the field.

Sutton noted Lagos played in Honduras at a professional level and struggled transitioning to a different brand of soccer here, but he still proved to be a great addition to the team.