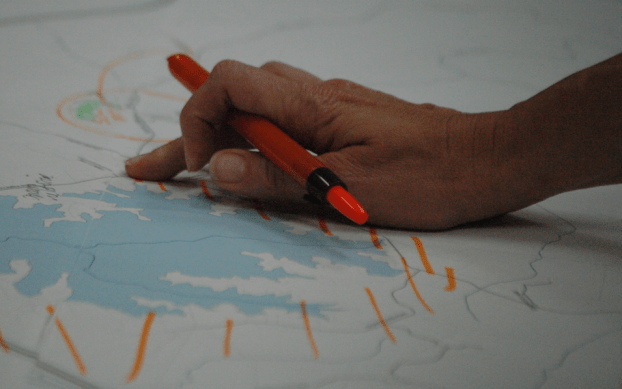 EMILY HOLLINGSWORTH | HERALD Cumberland County Planning Director and Zoning Administrator Sara Carter points to the Eastern side of the Cobbs Creek Reservoir during a land use meeting held Tuesday.

The majority of neighbors who agreed on a land use map for land surrounding the Cobbs Creek Reservoir were able to further interact with the map in a somewhat unusual fashion during a Tuesday meeting at the Cartersville Rescue Squad Building, led by Planning Director and Zoning Administrator Sara Carter.

Carter created a very large replica of the land use map for the meeting, where between 20-25 participants got to take a closer look at the map and suggest changes, which Carter made with an orange and green highlighter pen.

The conceptual map that saw the greatest favor during the May meeting contains a section for a potential village district around the area of Cartersville Road and Cartersville Extension, where commercial properties could be developed up to 5,000 sq. ft. on one acre.

Residential and commercial properties were conceptualized on the map surrounding Punch Creek and Sawmill Road, south of the base of the Cobbs Creek Reservoir Plan Area.

She added regulation standards would increase with properties of such density.

Carter said residential properties could also be built in these areas, and the maximum number of dwellings with the plan would be 16,850.

The largest change suggested by those at the meeting, the majority of whom resided in Cumberland and some who live near the reservoir, was creating greater opportunities for development on both the east and west side of Columbia Road, where the eastern side had received less development initially, Carter said.

A memorandum of understanding between Cumberland County and Henrico County was agreed to in 2010 for the Cobbs Creek Reservoir, and Henrico began the first phase of building its reservoir in 2015. The reservoir is estimated to cost $280 million and permanently impact slightly more than 15 miles of stream bed. The reservoir would collect water from the James River.

Though land on both the western and eastern sides of Columbia Road may have equal potential for development, population density was a concern for some of the residents who attended the meeting.

One participant pointed to a statement made by Carter during the May meeting, saying that significant development would most likely not occur for the first 20 years after the land use has been approved.

Carter said the statement still holds true, pointing out that bodies of water do not guarantee bombastic commercial or residential development, citing the lack of development surrounding Briery Creek in Prince Edward County.

Carter noted that industrial development surrounding the reservoir, while it may not be on the map’s radius unless it meets zoning standards, could be an asset in the county that creates jobs.

Rick Rowden said after the meeting that residential development density around the reservoir was a concern for him, and thought that the meetings had taken steps to address it.

“I thought it went pretty well actually (and) thought it was very informative,” Rowden said.

Carter said she plans to take the suggestions made by those who attended the meeting and create a draft of the map. Carter will present the draft of the map, including text describing the village, during a meeting tentatively scheduled for the end of August or the beginning of September.

Longwood University’s Board of Visitors appointed its newest rector and board officers during a weekend-long annual retreat recently, according to... read more