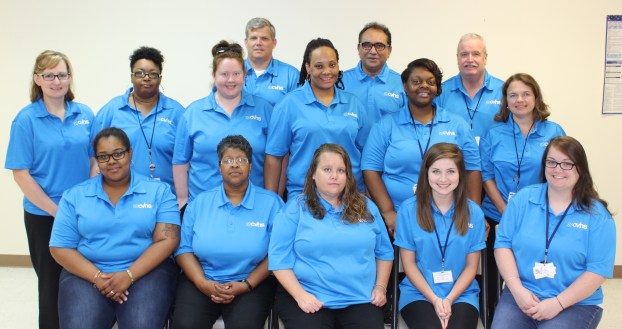 According to a press release, the award was presented June 6 at the VCHCA’s annual awards banquet at the Richmond Marriott Hotel in Richmond.

“Many of the pharmacy staff, including pharmacists, pharmacy techs and patient services representatives from both the New Canton and Petersburg locations were in attendance to accept the award,” officials said in the release. “In his acceptance on behalf of the pharmacy team, Pharmacy Director David Christian acknowledged the hard work the pharmacies’ staff do every day and that he ‘stands on the shoulders’ of the staff.”

The release cited he acknowledged that the staff has been through a number of major transitions this year, including the installation of new pharmacy software.

“He also recognized the loss felt by the loss of CVHS’ Executive Director Rod Manifold earlier in the year,” officials said in the release. “He expressed gratitude that his staff has continued to deliver a high level of service to CVHS’ patients.”

Paula Tomko, interim executive director, went on to say in the release that CVHS was delighted that the CVHS pharmacy staff has been recognized by their peers in this category.

“Their success is a testament to the leadership of the former and current pharmacy directors. They have created and maintain a team that is truly vested in improving our patient outcomes and adding value to support the delivery of quality care across the organization,” Tomko said in the release.

Three members of Central Virginia Health Services’ Board of Directors were there to celebrate the occasion — including H. Frankie Sheridan, president, Byron Adkins, vice-president, and Robert Smith, treasurer.

According to the release, community health centers like CVCHC and AAHWC are community-based and patient-directed organizations that serve populations with limited access to health care because of geography, lack of insurance, poverty or other factors. “Along with other health care safety net providers, the health centers play a key role in the community’s health. CVCHC and AAHWC take most insurance plans and offer an income-based discount for services for low-income families.”

The General Order of the Founders and Patriots of America gathered in the Queen of the south — Atlanta, Georgia... read more