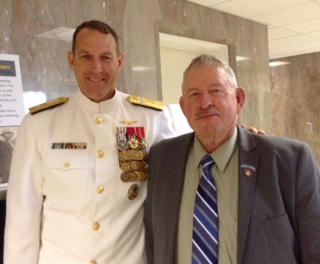 Stephen Wheeler, of Buckingham, attended the Change of Command Ceremony for his nephew, Rear Admiral (RDML) William W. Wheeler III at the Norfolk Naval Station on June 8. RDML Wheeler’s current assignment is with the Commander in the Patrol and Reconnaissance Group of the U.S. Atlantic Fleet. Wheeler is returning from his prior assignment as the deputy commander of the Combined Joint Task Force at the Horn of Africa in Djibouti, Africa.