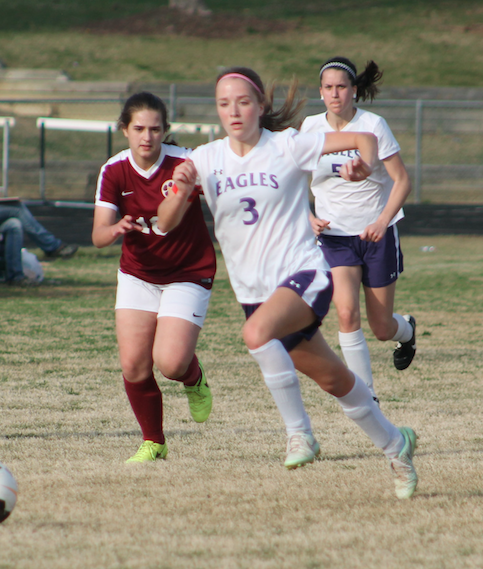 ‘An understanding of playing together’

Prince Edward County High School’s varsity girls soccer team came on particularly strong near the end of the 2017 season, finished with a 9-6-2 record and netted five All-Quad Rivers Conference 34 honorees, including three on the first team.

In the postseason, the Lady Eagles held the No. 4 seed in the conference tournament and advanced as far as the semifinals before falling 6-1 to No. 1 Goochland High School.

Prince Edward Head Coach Madeline Buczek said she was proud of her team’s overall performance for the 2017 season.

“During the season, they all improved as players and as a team,” she said. “They all got a better understanding of the game and really came together. I could not be prouder.”

The coach said she did not think the Lady Eagles had a low point during the year, but she said the high point of the season started the final time they faced Cumberland High School.

“The team really got an understanding of playing together and meshed so incredibly,” Buczek said. “From that point on the team played as a whole. The passes connected, the shots were on goal and our defense held its line.”

For her contribution to the team, Samantha Buczek, a team captain, received all-conference recognition for the third straight year.

“She made first team because of her knowledge of soccer, as well as her skill,” Coach Buczek said. “She was the key player for our team. The other coaches recognized the amount of work she did during each game to help our team and rewarded her for that.”

For the year, she produced six goals, 26 assists, 69 steals and 43 intercepts.

Cheyne was another team captain who was receiving all-conference recognition for the third time.

“She made first team because of her speed and the amount of goals she scored for the team,” the coach said. “She is a very sweet girl with a drive to win. Her fitness also played a key role in her success.”

Gridley, the Lady Eagles’ only senior this year, has been a consistent all-conference honoree during her high school career.

“Erin made first team because of her strong foot and knowledge as a defensive player,” Buczek said. “She worked hard to keep the defense in line and pull the other teams (offside).”

Gridley finished the year with 40 steals and 39 intercepts while also handing out two assists on offense.