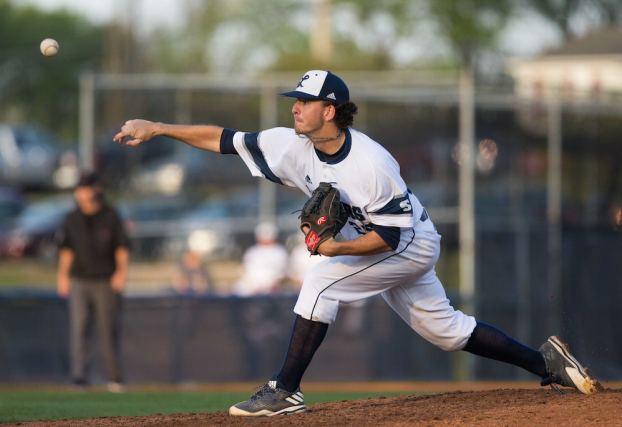 LONGWOOD UNIVERSITY Longwood University senior Cody Wager came from Pensacola State Community College and a made a big impact for the Lancers during the 2017 season, leading the Big South Conference in strikeouts and making the all-conference second team.

The milestone-laden run of Longwood University’s baseball team in 2016 was always going to be a tough act to follow, but the Lancers struggled significantly in 2017.

After winning 32 games last year, a program record in Longwood’s NCAA Division I era, the Lancers finished 19-34 overall this season.

They went 14-10 last year in the Big South Conference during the regular season, claiming a program-best No. 3 seed in the conference tournament. But this year they went 7-17, were last in the conference and did not qualify for the tourney.

“Overall, it was somewhat disappointing of a season for us,” Longwood Head Coach Ryan Mau said. “I thought we were just inconsistent all year long putting all three phases of the game together. … We’d hit early on, and we didn’t pitch. And then when we got our pitching figured out, our hitting disappeared. And then when we got both of those things going, our defense disappeared.”

The coach said that he thought his team started conference play well, hosting Charleston Southern University in a three-game series and going 2-1.

“We unfortunately let game three get away in what would have been a sweep to start conference play, and that kind of just sent us on a downhill path, I felt, from there,” Mau said. “We just were never able to recover.”

Reflecting on the things that went right for Longwood this year, he highlighted the good job done by the team’s many young players who got a lot of playing time — experience that he expects will pay off for the team in the future.

“I thought Antwaun Tucker, a local product, had an outstanding season,” Mau said. “I think he was second on the team, offensively. I believe he was No. 7 in the country in triples. And for him to play almost every day and put up those kind of numbers as a freshman just shows you how bright the future is with him.”

Though wins were hard to come by on the mound, the Lancers experienced some key success in pitching.

“We broke the school record for strikeouts, which was pretty impressive, a record that we set my first year here,” Mau said. “And that puts us No. 3 in the country right now in strikeouts per nine innings, which our guys were proud of. To strike out over 500 people in a season is an impressive number.”

“We did some good things on the bases — top 50 in the country in stolen bases,” Mau said.

Finding some pitching in the offseason will be a priority, particularly after losing Cody Wager to graduation.

Mau gave high praise to Wager, noting he “deserved a better win-loss record than he got, but did a great job filling a Friday night role that we didn’t know who was going to be that guy.”

The Lancers might lose rising senior shortstop Michael Osinski, their 2017 offensive leader, to the MLB Draft. He batted .308 during the season, while Tucker batted .298.