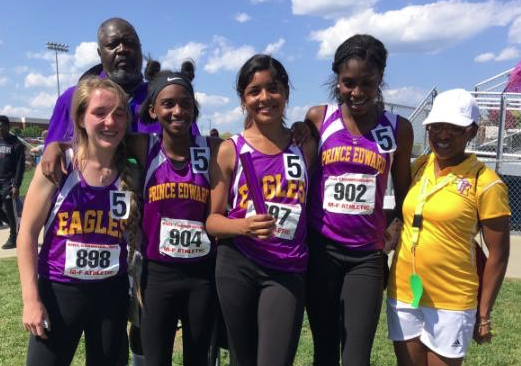 A trio of titles at the state meet

Lady Eagles freshman Makayla Morris won the girls high jump in the Group 2A meet with a 5-foot-3-inch leap.

Prince Edward Head Coach James Baker said the meet had its ups and downs for some of his student-athletes, but fans of the program had reason to cheer by the end of Saturday.

“It was a good day,” Prince Edward Head Coach James Baker said, adding that he was trying to get his student-athletes “to understand that sometimes at a track meet or just like in life, stuff happens. You drop a baton or whatever the case may be or anything, that stuff can happen. You just have to deal with it and go on. It’s not so much what you do when you mess up, it’s what you do after you mess up.”

The Prince Edward girls had trumped East Rockingham for the 4×100 regional title the week prior.

Despite their disappointment in the state meet Saturday, Booker, Seay, Jones and Wynn went on to win the last running event of the day — the 4×400, which they lost during the regional meet to Brunswick.

“We managed to drop our time by five seconds,” Baker said. “And it was an exciting race because we led most of the way and then just like the week before, on the last lap, (Brunswick’s) anchor came by and passed Montiera on the back stretch. But Montiera ran with her, and when they hit the top of the home stretch, Montiera picked it back up again and outran her down the straightaway for the win.”

Prince Edward’s girls track and field team scored 32 points and placed seventh out of 28 teams to score, the highest placement of any team — boys or girls — from the Heart of Virginia.

“For the girls, Makayla Morris winning the high jump was a really exciting thing for her,” Baker said.

She missed her first two attempts at 4-8 on Friday, almost putting her out of the competition, but she came through in the clutch, clearing the bar on her third try.

Individuals and relay teams placing in the top eight of an event received all-state status.

Cumberland’s varsity boys team produced 20 points to place 12th out of 36 teams to score in the Group 1A state meet.

“We had a good showing,” Cumberland Head Coach Kenneth Jasey said. “We knew it was going to be tough in some particular events, as it was.”

Jasey said he and his staff take pride in the 4×800 team, and he also highlighted the 4×400 team of Rivera-Reed, Bapties, Halvorsen and sophomore Jalen Foster, which finished second to Stonewall Jackson High School of Quicksburg.

Cumberland’s dynamic sibling duo of junior Muhammad Fulani and sophomore Munirah Fulani was not able to attend the meet due to it conflicting with an out- of-country trip that had been booked in advance.