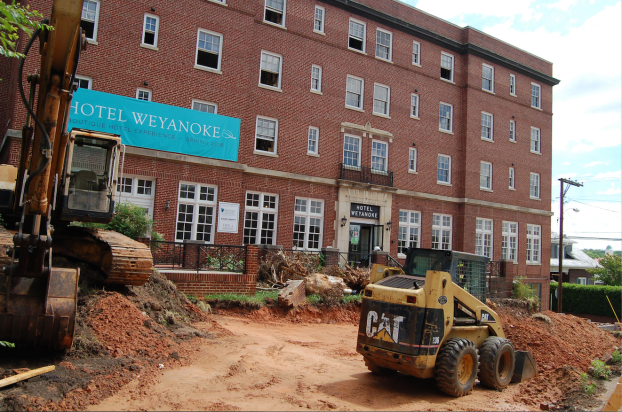 MORGAN WHITE | HERALD Construction and excavation in front of the Hotel Weyanoke — which is being renovated — will result in a half circle drive once complete.

Q: I know the Hotel Weyanoke is being renovated, but what’s going on with the excavation work in front of the building along High Street?

The excavation and construction in front of the Hotel Weyanoke at the corner of High and North streets in Farmville will result in a half circle drive once complete.

“You’d be entering off of the corner of North and High street and exiting on High Street further up the hill there,” said Ross Fickenscher, co-owner of the Hotel Weyanoke, of the plans for the front of the building.

He said nothing has changed as far as design of the building is concerned.

“As you can see from the site, all of our footers are poured for the new building. We hope to pour that slab the week after next and then begin framing.”

Fickenscher cited excitement about the project.

“If we can just get out of the rain, we’ll start to make some great progress,” Fickenscher said.

The hotel is slated to create 76 new jobs and spur more than $7 million for the economy of the town.

According to a release from Gov. Terry McAuliffe’s office, the hotel, once complete, will feature four “unique food and beverage venues including: Sassafras, a bakery and market; Humble Pie, an artisanal pizza grill and market featuring locally-sourced organic ingredients and family recipes; Campagna, an Italian trattoria and tasting room; and The Bridge, a rooftop refreshment retreat.”

Developers are rehabilitating and converting the existing 27,000-sq. ft. building and constructing a 30,000-sq. ft. addition on the same property.

Candidates yet to file for school board

Q: Has anyone filed to run for school board in Prince Edward County? When is the filing deadline? No one... read more