According to Patrol Cpl. Chris Hudson, the event is organized across the state to raise awareness for Special Olympics. 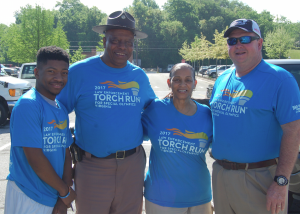 “We have been selling T-shirts and hats to raise funds,” Hudson said. “These shirts and hats were donated to us by Third Street Wrecker Service, of Farmville, and H&M Logging Inc., of South Boston.”

He said the department raised $1,995 for Special Olympics.

“We will continue to sell their shirts and hats until we are sold out,” Hudson said. “I would like to thank everyone for making this a very successful event. We look forward to continuing this event each year.”

“I think it’s a wonderful event. I was really excited to see it come to Farmville for the first time. I think it’s a project that we’ll continue to do, and hopefully it will grow larger and larger in the years to come,” Ellington said.

According to the Virginia Special Olympics website, the summer games will take place in Richmond on June 9-10.