HAMPDEN-SYDNEY COLLEGE ATHLETICS Hampden-Sydney College’s lacrosse team celebrates with the trophy and a sign commemorating them as the 2017 ODAC Tournament Champions. The Tigers defeated Lynchburg College 14-9 in the title game Saturday, earning a berth in the NCAA Division III Tournament.

It is the Tigers’ first title since 2001, and it was the first time they had ever won the ODAC Tournament, which began in 2002. Prior to that, the conference championship was awarded to the regular season champion.

The title also represented a remarkable start for Head Coach Jason Rostan, who is in his first year succeeding his father, Ray Rostan, who led the team to its other four ODAC championships during his 32 years as head coach.

“It was unbelievable,” Jason Rostan said of the Tigers’ latest championship. Noting it had been since 2001 since the last title win, he added, “I know for the alumni, for the team, for pretty much everybody involved with the program, it was just a really special, special thing to be able to do that again. It’s something we’ve been trying to get back to for a long time.”

Hampden-Sydney hosts Transylvania University on Wednesday at 3 p.m. in the NCAA Tournament.

To reach that game, the Tigers blazed a path through the ODAC tournament as the No. 4 seed. After defeating visiting No. 5 Shenandoah University 18-4 in the quarterfinals May 2, they stunned host No. 1 Washington and Lee University with a 19-10 blowout win Friday.

Praising Arntzen, Rostan said, “He’s our senior captain, our face-off guy — he had an unbelievable tournament.” 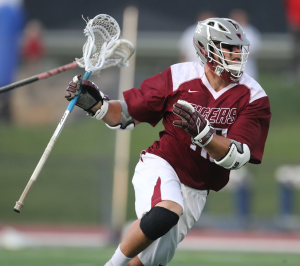 “I think he’s just been an unbelievable leader this year,” Rostan said. “He just wouldn’t let the team quit. He wouldn’t settle for anything but winning the whole tournament this weekend. … He was really the key guy for us.”

Rostan highlighted Arcuri, who recently took over the role of goalkeeper and had 19 saves against Washington and Lee on Friday.

“(He) kind of shut the door for us,” Rostan said. “I think that was a real key, and he played really well Saturday night. So, he’s just been a spark for our team in the tournament.”

Levin scored five goals to go with an assist against Washington and Lee.

“He just had a huge game, and then I just felt like Lynchburg didn’t have anybody that could match up with him,” Rostan said.

Levin had three goals and two assists in the title game.

The coach also praised junior midfielders Hunter Brown and Chandler Shaheen for great play during the tournament and throughout the season.

Rostan’s exciting weekend continued Monday as his wife prepared to give birth to his second child and first son.

“It’s crazy, it’s crazy,” Rostan said of the weekend. “It’s been awesome, though. Once we’re all through it, it’s going to be something to look back on, you know?”

The Tigers (15-5) face the Transylvania Pioneers on Wednesday.

“It was a really neat opportunity be able to secure a home game in the (NCAA) Tournament,” Rostan said, noting it has probably only happened two or three times in program history.

Tickets are $3 for adults and $2 for students and children, while children ages 2 and younger get in for free.

Longwood University’s softball team is surging at the perfect time to help take excitement to the next level for the... read more