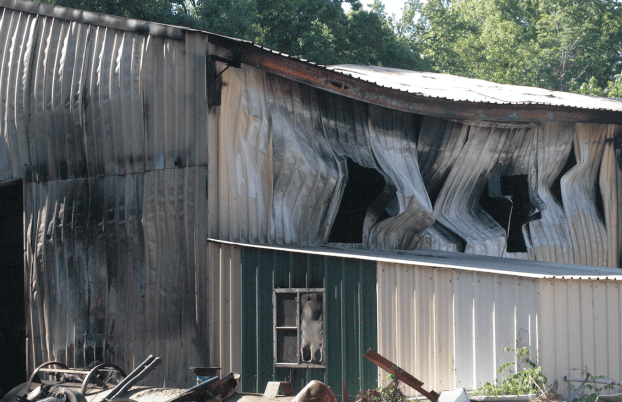 EMILY HOLLINGSWORTH | HERALD This shed in Rice caught fire Tuesday morning. Flames are believed to have warped the metal building as evidenced in this photo.

Volunteer fire departments from Farmville, Rice and Burkeville were at the scene during the incident, according to Rice Volunteer Fire Department Assistant Chief Sean Lewis.

Davis said he rode on one of the fire trucks to the incident.

“(We were) the first engine on the scene,” Davis said.

Lewis does not believe there was anyone in the shed at the time of the incident, and no injuries were reported.

Crew members, who used hoses to douse the fire, estimate that the area was secured within 30 minutes of arriving on scene.

The shed contained mechanical tools that Davis and his father used. Davis, his father and the departments are unsure what may have caused the fire.

Lewis estimated that the fire had warped a good portion of the building.

Harry Davis Sr., Davis’ father, said he was working in his greenhouse nearby when he heard what sounded like a “double-barrel shotgun” go off.

When he went closer to the greenhouse’s entrance, he said he saw fire on the roof of the shed.

Benchmark Community Bank (BCB) recently announced the promotions of six veteran members of its firm to compose the executive and... read more