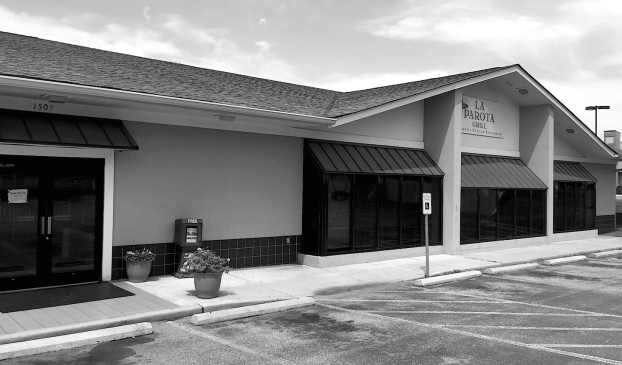 The Solorios feel La Parota is in a better location now on South Main Street than they were with their first building out by 460 Bypass.

When you step into the entryway of Farmville’s La Parota restaurant and look to your right, you see on the wall hundreds of three by four inch color snapshots of smiling faces — children, seniors, families and college students. What you won’t see are the hours, weeks, months and years of labor that have made so many customers so happy.

Restaurant owner Jorge Solorio will tell you how hard it is please everyone in his business  to survive setbacks like the 2013 fire that destroyed his first building, the recession beginning in 2008, the challenge of finding enough staff to handle a packed house, the difficulty of making sure signature dishes are prepared the same way by different cooks and adapting to new customers with different tastes. But he and his wife, Estela, have been doing it successfully in Farmville since 2000.

That’s when he and his brother-in-law and came from Lynchburg to see if this community wanted a Mexican restaurant.

Even to get to the point of establishing a new business involved Jorge and Estela’s working for many years in California, Georgia and Alabama. Getting his green card in 1986 and having only seven years of schooling, Jorge had to work many jobs, learning English on his own along the way.

The satisfaction he sees on his customers’ faces — and the knowledge that his three children have more opportunities than he did 50 years ago in the South Central Mexican village where he grew up — is worth the effort.

What he’s found hardest these days is losing some of his most memorable patrons.

“One lady came with her husband many times,” he said. “Then he passed away.”

Later she came alone one day to ask if she could have a special celebration to remember him. “Whatever you want,” Jorge said.

The result was a giant ice cream sculpture with a sombrero for decoration.

“It’s hard when you lose someone,” Jorge said.

The Solorios work hard to bring new customers in to become regulars. They appreciate hard-working families who need a night out. He and his wife labored long hours for years when their children were young — sharing the work day so one could always be home with the children because daycare was so expensive.

“We wanted them to have an education, opportunities,” he said. That means the parents continue to take on the stress, the financial burden and the anxiety of keeping a small business alive. One son will begin community college soon; another works in the restaurant and the daughter is in a nursing program.

The Solorio family feels La Parota is in a better location now on South Main Street than they were with their first building out by 460 Bypass. Southbound traffic had to go past the restaurant, make a U-turn, and come back to get into the parking lot. And the recession brought a drop in customers.

Then something worse came.

“A friend called me,” Jorge said, “when I was at home sleeping, 6 a.m. in the morning. ‘Your restaurant is on fire. It will be gone by the time you can get here.’”

The Solorios salvaged only one night’s take from a fire-proof box in the ruins. But insurance eventually helped them lease their current building and begin again. Business was slow at first, but gradually they regained clientèle, not just from Farmville but also from the surrounding counties of Buckingham, Cumberland, Nottoway and Charlotte.

What brings back his smile are the many happy faces you see just inside La Parota’s doors.

Dr. Michael Lund can be reached at lundmc@longwood.edu

In this devotional, I would like to look at I Timothy 1: 12-17. Paul is writing this letter to Timothy,... read more