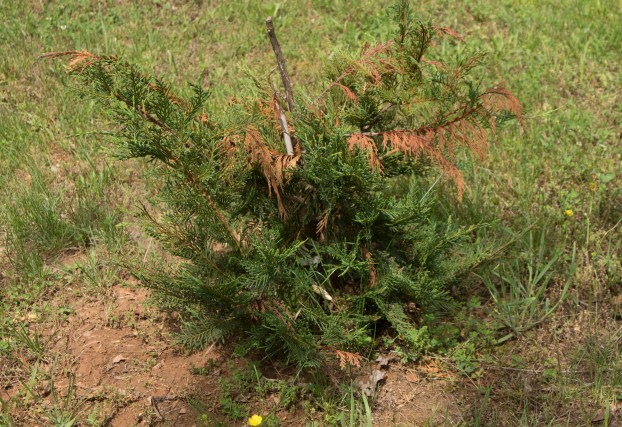 The deer broke off 6-inch pieces of this Leyland cypresses just for sport.

I own a farm in Lunenburg County that my husband and I have decided to turn into a weekend bolt hole and eventually a retirement home. It’s about 100 acres of red clay heavily pocked with rocks. There’s a house that was built in the 1940s and the remnants of the original garden — peonies, daffodils, boxwood, crape myrtles and azaleas.

How the azaleas have survived is a mystery because there are so many hungry deer — and a bear too — that lurk around the perimeter of the yard until we turn off the lights and then they feast.

My usual type of garden is a modified cottage garden with hellebores, hostas, daylilies and great drifts of azaleas in the woods. In other words, except for the hellebores, a veritable salad bowl for the hungry deer. So I need to develop a new gardening style that will still reflect my loves, but also adapt to the new reality of horrid soil and deer lurking in the woods.

It’s not easy because old habits and passions are hard to escape. I can just picture about 400 daylilies all-glowing in the early summer sun. They’re tough and would be happy in the wretched red clay. Sigh.

So, I’ve been researching deer-resistant plants — there’s probably no such thing as a deer-proof plant if the deer are seriously hungry — and making lists. The new garden will contain lots of “old fashioned” plants that have a history of surviving deer at this farm, as well as some new additions that I think might survive both the soil and the deer.

What’s on my list? A new lower-growing variety of fragrant mock orange with double blooms; a new variety of grandma’s old standby, Japanese flowering quince, that has double blooms and isn’t quite as weedy; bearded irises in all colors, but especially yellow, white and velvety dark purple; daffodils in every size, shape, and color I can find; some of the new interspecies hybrid hellebores that have interesting multicolored foliage; low-growing Japanese plum yew, an evergreen that hugs the ground and grows ever so slowly; and peonies, lots of peonies in pink, deep dark red and white. And more boxwood too if I can find the cloud-shaped ones that I want and if I can find a responsible grower who takes all precautions against boxwood blight.

My trusty garden helper has cleared honeysuckle, poison ivy and piles of just general weedy stuff. The garden design has been scribbled on graph paper and the digging has begun. I dig, walk around and study the large space that I have to work with, consult my plan, modify the plan and repeat the process over and over. The first daffodils were planted last fall; this year I’ll plant lots more, plus hyacinths and crocus.

Since early spring I’ve been working on the mixed perennial borders, and they’re beginning to take shape. My garden guy and I have planted 36 peonies, four japonicas, more irises than I can count and eight Japanese plum yews. We’re still waiting for the mock oranges and the boxwood. Most of the irises have been reclaimed from what once was the edge of the yard here at the farm. This fall we’ll add new irises.

There have been a few failures. I did a mixed evergreen screen that included a few Leyland cypresses. They’re not considered favorites of deer, but you just never know. The deer marched through one night and broke off the top six inches of every Leyland cypress and left the pieces on the ground. Apparently, they weren’t tasty, but the deer had to try every plant just to be sure.

Forsythia has also been problematic. It’s been growing here for years, so I just moved some to new locations. That attracted the deer’s interest. Again, they didn’t eat the plants, just tasted and left them.

And so, the game is on. What can I plant that will survive the wretched soil and that the deer will generally ignore? It’s not gardening as I’m used to practicing it, but a new, slower, more considered approach. I suspect that the discipline will be good for this old gardener. Perhaps you can teach an old gardener new tricks after all.

Design in the vegetable garden

Many years ago, when I was a kid, growing vegetables was serious business. We had row after row of melons... read more