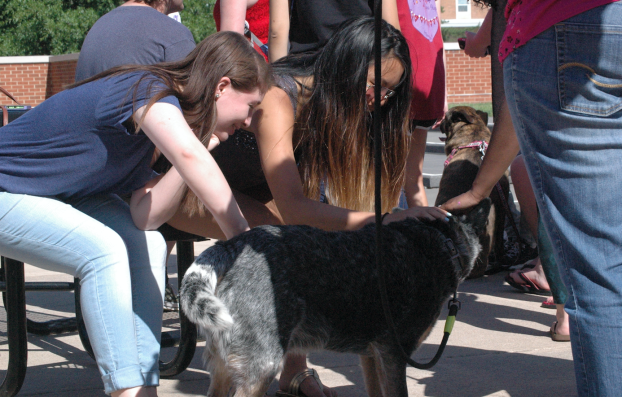 Pets and people united for a brief break on Brock Commons at Longwood University the afternoon of May 5 to de-stress from finals week and to make acquaintances with newfound furry friends.

The event, called Study Paws, is held twice a year and its purpose is twofold: giving students a way to combat stress during finals week, which took place May 3-9, and allowing dogs to explore the campus and interact with students and faculty. 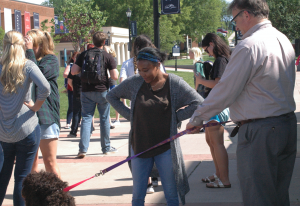 Canines large and small, ranging from golden retrievers to sheepdogs to miniature dachshunds, frolicked along Brock Commons, some playing with water at a nearby fountain and some playing fetch with their owners and new friends on the grassy lawn.

Most of the four-legged friends settled around the commons, soaking up attention from students, faculty and their owners. Water bowls were placed in the area for dogs to get a quick drink of water.

Dr. Jake Milne, an associate professor of sociology at Longwood, started the Study Paws program more than six years ago. Now, after several semesters, he said the event is still going strong and is mutually beneficial for both the students and the pets.

“It’s a great opportunity for students to de-stress, play with the dogs,” Milne said. “(The dogs) love it, and the students love it.”

Steven Samaras, an assistant professor of management at the university, brought his labradoodle Coco to join the fun. Coco’s playfulness and energetic personality made Samaras remark that “sometimes she behaves.”

Samaras said that Coco took full advantage of the event to socialize with other dogs and with students. 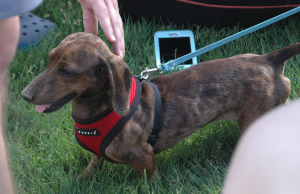 EMILY HOLLINGSWORTH | HERALD
Frankie, a miniature dachshund, enjoys the attention given to him by Longwood University students during Study Paws.

“She loves it,” Samaras said, and added about the event, “I think it’s a great idea.”

Emory Read, a senior at Longwood, said as a student about to graduate and in the midst of a hectic finals week schedule, the event was “a way to relieve my stress level and relax.”

Read, who also attended the Study Paws event last semester, said that the events both in autumn and spring happened to fall on days with pleasant weather.

“(They were) always on a nice day, so that helps,” Read said.

“It’s pretty good,” Anderson, a communication sciences and disorders major, said about the event. “I like it.”

Cameron Raglin, a senior, brought Harley, an Australian Shepherd Boxer mix to the event. He said, like Read, that the event gives students a chance to unwind from an often stressful week.

“I think it’s nice,” Raglin said, who noted Harley was about five- and-a-half months old. “It gives everyone a break from finals.”

The event is a reprieve for faculty as well as students, said Elizabeth Parker, a clinical educator in Longwood’s nursing program,

“I think it’s so good,” Parker said. “I think it really provides a stress relief.”

Parker added that the dogs themselves also make the event enjoyable.

“Plus, they’re so cute,” Parker said.

The Longwood Center for the Visual Arts (LCVA) held its 2017 Community Achievement in the Arts Awards ceremony April 29... read more