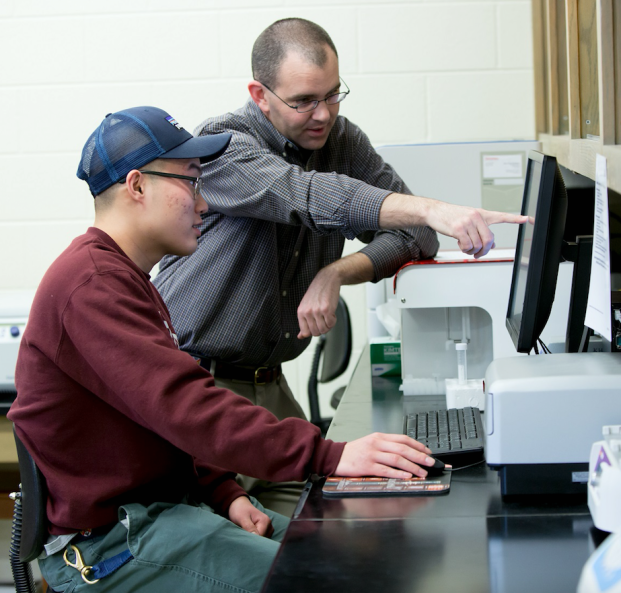 Elliott Associate Professor of Biology Dr. Kristian Hargadon, right, discusses data findings with H-SC senior James Lau, who was selected to present his own cancer research at a recent national meeting in Washington, D.C., along with H-SC senior Brant Boucher.

Hampden-Sydney College (H-SC) had two representatives among the approximately 100 undergraduate students who were selected to present cancer research at the American Association for Cancer Research (AACR) Annual Meeting in Washington, D.C. according to a press release from the college.

School officials said that to be selected, H-SC seniors Brant Boucher and James Lau had to submit abstracts — paragraph summaries of their entire research — as well as be nominated by two AACR members.

Held April 1-5, the AACR Annual Meeting was a substantial event.

“More than 20,000 cancer researchers attended, making it one of the largest cancer research meetings held to date,” officials said in the release. “Highlights of the meeting included leading cancer research from investigators all over the world and featured cutting-edge technologies and advances in cancer prevention and therapy, as well as panel discussions on topics such as cancer advocacy and policy.”

Lau said that if he were to summarize his experience of attending the meeting in two words, they would be “eye-opening” and “motivating.”

He said the fact that he was selected to be at such a significant national meeting showed how beneficial the H-SC biology department is to its students.

“To me, it served as a testament of the benefits of Hampden-Sydney education and just small liberal arts school education in general,” he said.

Lau also noted that it was motivating to see other students his age trying to combat the same disease, putting them all on a united front.

“It’s great to see what your peers are doing, and it definitely makes me look forward to continue doing research potentially in the future,” Lau said. 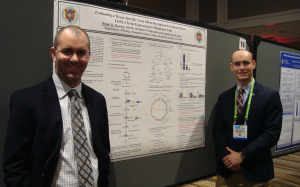 H-SC senior Brant Boucher, right, poses for a photo with Elliott Associate Professor of Biology Dr. Kristian Hargadon while presenting a poster illustrating his own cancer research at the AACR Annual Meeting in Washington, D.C.

Boucher said that one thing that really stuck out to him about the meeting was everyone’s enthusiasm and dedication.

“Of any of the conferences I’d been to, this one felt the most unified in its mission,” he said. “Occasionally conferences can feel highly commercialized or even a bit superfluous, depending on the organizations present and the goal of the science at hand, of course. While the pursuit of profit and/or knowledge is not necessarily a bad thing, it certainly doesn’t bring people together in the way that a common enemy does. Cancer is everyone’s enemy, and nowhere was that more clear than on the floor at AACR’s meeting.”

On April 1, both Boucher and Lau presented their research on posters, as did the other students participating.

“We were both presenting at an undergraduate kind of sub-conference of the overall meeting,” Lau said. “… They allocate where you put your poster. We were presenting at the same time, but in different areas of a large conference room.”

Lau noted that among those present were a lot of professors, possibly looking into what undergraduate research was going on at other schools.

“There were also a few companies, I think, that were walking around too, scouting for potential employees in the future,” he said.

According to H-SC’s press release, “The melanoma research that James and Brant have been conducting in small-town Virginia with Elliott Associate Professor of Biology Dr. Kristian Hargadon is a significant addition to the conversation.”

“Their work was well-received at the meeting, particularly as it provides new insights into FOXC2 function that have not been previously reported and describes a novel strategy for interfering with FOXC2 specifically in melanoma — but not healthy — cells,” Hargadon said in the release.

Officials said that Lau’s and Boucher’s research focuses on the FOXC2 protein, which is overactive in many aggressive cancers.

“James’ work has shown that FOXC2 in melanoma cells promotes the ability of these tumor cells to migrate and invade tissues, which relate to the capacity to metastasize,” officials said in the release. “By understanding more about how the protein furthers these metastatic behaviors, this work could potentially identify new targets for cancer therapies designed to inhibit the spread of melanoma. In this regard, Brant’s work involved a preliminary investigation of a treatment strategy that aims to block FOXC2 function in melanoma cells. Though it is in its very early stages, the idea is that the ability to shut down FOXC2 in melanoma cells specifically could inhibit tumor progression without altering the normal function of FOXC2 in healthy cells.”

Lau said he will attend Eastern Virginia Medical School starting in the fall, and the release noted that Boucher will attend medical school at Virginia Commonwealth University.

Meanwhile, Boucher and Lau are competing against each other to become valedictorian at Hampden-Sydney.