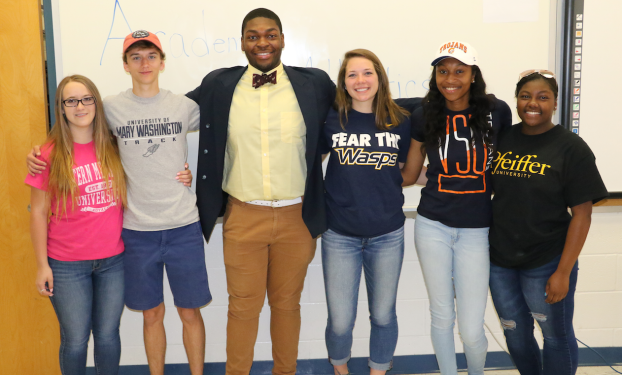 Six senior student-athletes made Monday a big day for Cumberland athletics as they formally announced their commitments to continue their athletic careers in college during a ceremony attended by family, friends, coaches and administrators at Cumberland High School.

“When you combine her love for the game and her fiercely competitive personality together, you end up with a lethal volleyball player,” Sutton said. “… I know she will give VSU the same fire and the same excitement.”

Anderson, who was a four-year letterman in volleyball at Cumberland, plans to major in sports management and minor in communications at VSU.

“Matthew, he’s going to do a tremendous job — great coaching staff up there at Mary Washington,” Jasey said.

Bapties, a four-year letterman as a long distance runner at Cumberland, said he is thinking of double majoring in sociology and psychology.

“Ciara, she’s going to do a good job walking on with the cross country and the track and field,” Jasey said.

Gilman, a two-year letterman as a long distance runner at Cumberland, plans to major in business management with a probable minor in economics.

Jasey said that at Pfeiffer, Ford is “going to compete well in the discus and shot put.”

A four-year letterman in track and field at Cumberland, Ford plans to major in criminal justice and minor in psychology.

“He has that quiet strength,” Knapp said. “He’s not going to be the loudest guy on the field, but he’s going to be the guy you can always count on, and he’ll take that to the next level. He’ll be successful there, no doubt. His ability plus his attitude will equal success.”

“I think Mary Kate will bring a lot to the next level in regards to leadership,” Gilliam said. “She’s a great athlete, a great person.”

Lettering for three years in softball at Cumberland, Perry plans to major in exercise science.