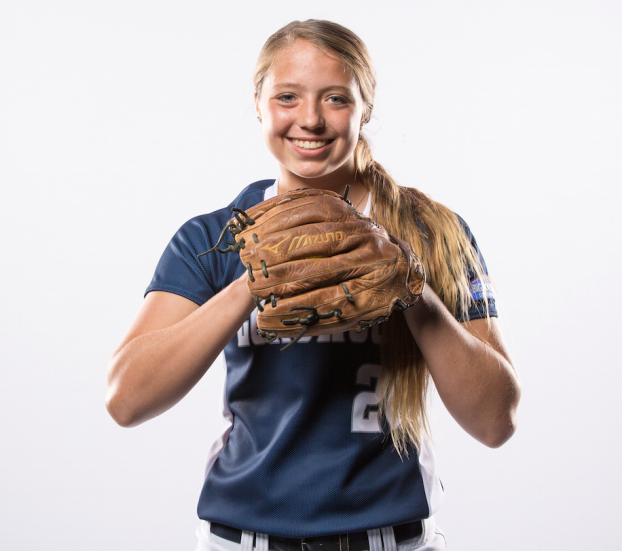 Kasey Carr is just starting her NCAA Division I softball career, but the freshman first baseman has already demonstrated to Longwood University Head Coach Kathy Riley some important qualities that show she will be a major asset to the Lancers in the years to come.

The coach noted that the game of softball will bang up players as they are forced to throw their bodies onto the ground at full speed, but if Carr gets banged around in a game, “(I) don’t hear a lot out of her. And so she’s got a lot of physical toughness, not the kind where you just automatically know it, but over time, you know that she’s physically tough.”

Riley said that the other thing that’s most impressive with Carr is that “she, in critical situations, maintains composure. She’s not like a freshman. If the game’s on the line, it’s just like it was if it was the first inning — she just doesn’t change that much.”

Her composure is remarkable given how the season has gone for Longwood.

Describing her Division I collegiate softball experience up to that point, Carr said, “It’s been up and down, but here lately, it’s been like a dream come true. It’s what I’ve always wanted to do since I was little.”

She indicated she started playing when she was 4 or 5 years old, exposed to the game early thanks to her mother, who was a coach.

Carr played Dixie Softball and later was a four-year member of the varsity team at Liberty High School in Bedford. She played at shortstop as a freshman and then pitched the next three years, the last two with her mother serving as coach.

She also played for the Aftershock, a travel ball team out of Lynchburg.

Joining the highly-successful Lancers brought with it the immense challenge of balancing a suddenly year-round softball schedule with school while trying to live up to the successes of seasons past without key players like Emily Murphy, Jamie Barbour and Carly Adams, who had graduated.

Carr started much of the season at shortstop before moving to first base when junior Kelsey Sweeney was injured.

“I’ve never played first in my life — ever — so it was a big transition from being on the left side of the field to the right side and having a lot more responsibilities, so it’s been different, but I’m starting to like it,” Carr said.

She has not grabbed headlines with her play on offense yet, but Riley is confident she will improve there “because she gets up at the plate and there is just a sense about her that she doesn’t feel overwhelmed ever,” the coach said, noting sometimes that comes naturally to people and is not taught.

Riley acknowledged Carr needs to develop, but said, “I think Kasey’s got a chance to be a very good player if she’ll work at it this summer.”